Border Contraband: A History of Smuggling across the Rio Grande (Inter-America Series) (Paperback) 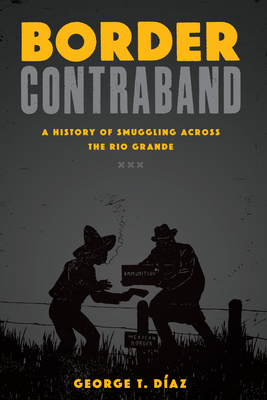 Present-day smuggling across the U.S.-Mexico border is a professional, often violent, criminal activity. However, it is only the latest chapter in a history of illicit business dealings that stretches back to 1848, when attempts by Mexico and the United States to tax commerce across the Rio Grande upset local trade and caused popular resentment. Rather than acquiesce to what they regarded as arbitrary trade regulations, borderlanders continued to cross goods and accepted many forms of smuggling as just.

In Border Contraband, George T. Díaz provides the first history of the common, yet little studied, practice of smuggling across the U.S.-Mexico border. In Part I, he examines the period between 1848 and 1910, when the United States’ and Mexico’s trade concerns focused on tariff collection and on borderlanders’ attempts to avoid paying tariffs by smuggling. Part II begins with the onset of the Mexican Revolution in 1910, when national customs and other security forces on the border shifted their emphasis to the interdiction of prohibited items (particularly guns and drugs) that threatened the state. Díaz’s pioneering research explains how greater restrictions have transformed smuggling from a low-level mundane activity, widely accepted and still routinely practiced, into a highly profitable professional criminal enterprise.

"What governments define as illegal and what people consider wrong can differ widely," observes George T. Díaz in this engaging history of smuggling along the Texas-Mexico border. . . . The flesh and blood he gives this history makes it a strong book for classroom adoption. . . . It offers a productive point of departure—a way of conceptualizing the social worlds of smuggling—that will shape scholarly conversations about this region for years to come."
— Journal of American History

"Historian Diaz provides a lively narrative of the smuggling and trafficking across the Rio Grande River from 1848 to 1945."
— Choice

"A well-researched historical study of smuggling along the Texas–Mexican border. Thorough and innovative . . . It is a work well done and worthwhile."
— Southwestern Historical Quarterly

"Díaz's Border Contraband is a gem. His clear and concise writing that brings in theory without all the theoretical jargon will make this an excellent option for upper-division undergraduate courses and graduate courses in both world history and borderlands studies. . . . Unlike many treatments of the U.S.-Mexico border, Díaz's is truly transnational."
— World History Connected

"A solidly researched volume that gives historical background to a contemporary hot topic, Border Contraband also demonstrates how smuggling has been a central part of borderlands Mexican American culture and lore."
— Journal of American Studies

"If one is to understand our current situation with Mexico, one only has to look to Díaz's Border Contraband. . . . a great addition to the history of the US-Mexican borderlands, giving both countries insight into the making of the border. Díaz has set the international research bar high, and as a result scholars and students will greatly benefit from such research."
— Hispanic American Historical Review

"In this insightful and concisely written book, George Díaz shows for how much of the nineteenth and twentieth centuries illicit smuggling played a central role in the daily lives of border people."
— Pacific Historical Review

"This book offers an interesting perspective into the first days of smuggling across the bushland of the U.S.-Mexico border, along some of the same back trails that smugglers use today."
— Book Marks