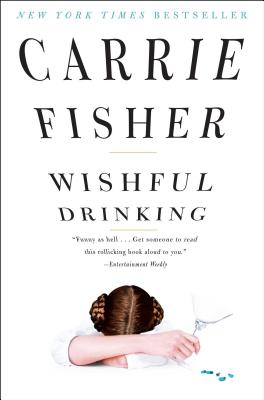 The bestselling author of Postcards from the Edge comes clean (well, sort of) in her first-ever memoir, adapted from her one-woman Broadway hit show. Fisher reveals what it was really like to grow up a product of “Hollywood in-breeding,” come of age on the set of a little movie called Star Wars, and become a cultural icon and bestselling action figure at the age of nineteen.

Intimate, hilarious, and sobering, Wishful Drinking is Fisher, looking at her life as she best remembers it (what do you expect after electroshock therapy?). It’s an incredible tale: the child of Hollywood royalty—Debbie Reynolds and Eddie Fisher—homewrecked by Elizabeth Taylor, marrying (then divorcing, then dating) Paul Simon, having her likeness merchandized on everything from Princess Leia shampoo to PEZ dispensers, learning the father of her daughter forgot to tell her he was gay, and ultimately waking up one morning and finding a friend dead beside her in bed.

Wishful Drinking, the show, has been a runaway success. Entertainment Weekly declared it “drolly hysterical” and the Los Angeles Times called it a “Beverly Hills yard sale of juicy anecdotes.” This is Carrie Fisher at her best—revealing her worst. She tells her true and outrageous story of her bizarre reality with her inimitable wit, unabashed self-deprecation, and buoyant, infectious humor.

Carrie Fisher (1956–2016) became a cultural icon as Princess Leia in the first Star Wars trilogy. She starred in countless films, including Shampoo and When Harry Met Sally. She is the author of Shockaholic; Wishful Drinking (which became a hit Broadway production); and four bestselling novels, Surrender the Pink, Delusions of Grandma, The Best Awful, and Postcards from the Edge.

"[Fisher] has a talent for lacerating insight that masquerades as carefree self-deprecation...The effect, ultimately, is extraordinarily painful while being extremely entertaining...[S]he's done her best to make sense of it all, and throughout, her humor has held up. In her own defiant manner, she's fought the good fight." -- The Los Angeles Times

"She's still funny as hell...Her stories bubble, bounce, and careen with an energy...Get someone to read this rollicking book aloud to you." -- Entertainment Weekly

"Fisher makes each crushing tragedy hilarious." -- People (4 out of 4 stars)

"Clearly, you should buy this book....she has expert comic timing and, perhaps more importantly, better stories than most drug addicts....Fisher is unafraid to write, brutally and vividly." -- New York Post

"Fisher, unlike most celebrities (especially ones spawned from other celebrities) can actually write, and...Wishful Drinking, though an extremely short book, is super salacious and entertaining." -- Jezebel.com

"Fisher is a language obsessive, a nimble verbal acrobat who puns and somersaults around a page with glee...If you are a fan of Fisher's fiction, a follower of her mental illness or simply a looky-loo stargazer curious about her Hollywood heritage, Wishful Drinking will likely make you laugh." -- Slate.com

"There are more juicy confessions and outrageously funny observations packed in these honest pages than most celebrity bios twice the length...With acerbic precisions and brash humor, she writes of struggling with and enjoying aspects of her alcoholism, drug addiction and mental breakdowns. Her razor-sharp observations about celebrity, addiction and sexuality demand to be read aloud to friends." -- Publishers Weekly (starred review)