The Emperor of All Maladies: A Biography of Cancer (Thorndike Biography) (Large Print / Hardcover) 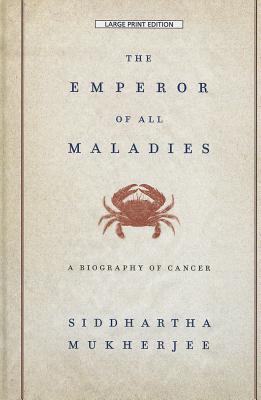 By Siddhartha Mukherjee
$42.23
If not in stock, we can Special Order from the publisher

“The struggle against cancer eventually touches the lives of every person on this planet. In The Emperor of All Maladies, Siddharta Mukherjee displays remarkable skill in blending a definitive history of this disease with a compelling narrative. The book is informative, moving, and provocative, and teaches us a powerful lesson about humanity. We live in the face of inevitable uncertainty, but the knowledge in these pages makes us stronger and more compassionate beings.”
— Geoffrey B. Jennings, Rainy Day Books, Fairway, KS

“For anyone whose life has been touched by cancer -- probably all of us -- this is a fantastic introduction to not only what cancer is, but also its history, cultural significance, and the legacy of our battles to overcome it. Mukherjee's treatment of this epic subject is multifaceted and told with energy, eloquence, and a deep sense of the human stories behind the medicine.”
— Mark LaFramboise, Politics & Prose Books and Coffee Shop, Washington, DC

"The Emperor of All Maladies "is a magnificent, profoundly humane "biography" of cancer--from its first documented appearances thousands of years ago through the epic battles in the twentieth century to cure, control, and conquer it to a radical new understanding of its essence. Physician, researcher, and award-winning science writer, Siddhartha Mukherjee examines cancer with a cellular biologist's precision, a historian's perspective, and a biographer's passion. The result is an astonishingly lucid and eloquent chronicle of a disease humans have lived with--and perished from--for more than five thousand years.

The story of cancer is a story of human ingenuity, resilience, and perseverance, but also of hubris, paternalism, and misperception. Mukherjee recounts centuries of discoveries, setbacks, victories, and deaths, told through the eyes of his predecessors and peers, training their wits against an infinitely resourceful adversary that, just three decades ago, was thought to be easily vanquished in an all-out "war against cancer." The book reads like a literary thriller with cancer as the protagonist.

From the Persian Queen Atossa, whose Greek slave may have cut off her diseased breast, to the nineteenth-century recipients of primitive radiation and chemotherapy to Mukherjee's own leukemia patient, Carla, "The Emperor of All Maladies "is about the people who have soldiered through fiercely demanding regimens in order to survive--and to increase our understanding of this iconic disease.

Riveting, urgent, and surprising, "The Emperor of All Maladies "provides a fascinating glimpse into the future of cancer treatments. It is an illuminating book that provides hope and clarity to those seeking to demystify cancer.