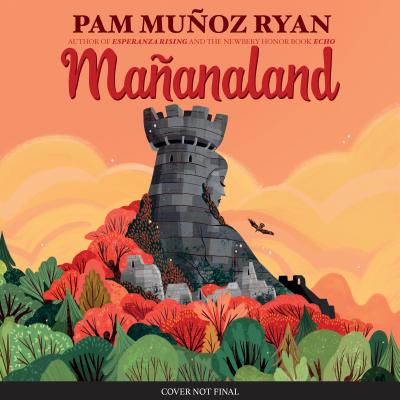 “A young boy seeking answers about his missing mother finds himself on a perilous journey to help someone in danger, a trek that will test his strength, courage, and determination. Pam Muñoz Ryan spins a beautiful tale, lightly brushed with magic, that speaks to the heart and reverberates with issues faced by contemporary society.”
— Betsy Covert, The Toadstool Bookshop - Keene, Keene, NH

* "Another unforgettable work from a master storyteller." -- Booklist, starred review

"A gem of a story with timely messages." -- School Library Journal

"Mañanaland is that rare gift of a book." -- Francisco X. Stork, award-winning author of Disappeared

Maximiliano Córdoba loves stories, especially the legend Buelo tells him about a mythical gatekeeper who can guide brave travelers on a journey into tomorrow.

If Max could see tomorrow, he would know if he'd make Santa Maria's celebrated fútbol team and whether he'd ever meet his mother, who disappeared when he was a baby. He longs to know more about her, but Papá won't talk. So when Max uncovers a buried family secret--involving an underground network of guardians who lead people fleeing a neighboring country to safety--he decides to seek answers on his own.

With a treasured compass, a mysterious stone rubbing, and Buelo's legend as his only guides, he sets out on a perilous quest to discover if he is true of heart and what the future holds.

This timeless tale of struggle, hope, and the search for tomorrow has much to offer today about compassion and our shared humanity.

Pam Muñoz Ryan is the recipient of the Newbery Honor Medal and the Kirkus Prize for her New York Times bestselling novel, Echo, as well as the NEA's Human and Civil Rights Award and the Virginia Hamilton Literary Award for multicultural literature for her body of work. Her celebrated novels, Echo, Esperanza Rising, The Dreamer, Riding Freedom, Becoming Naomi Léon, and Paint the Wind, have received countless accolades, among them two Pura Belpré Awards, a NAPPA Gold Award, a Jane Addams Children's Book Award, and two Américas Awards. Her acclaimed picture books include Amelia and Eleanor Go for a Ride and When Marian Sang, both illustrated by Brian Selznick, and Tony Baloney, illustrated by Edwin Fotheringham, as well as a beginning reader series featuring Tony Baloney. Ryan lives near San Diego, California, with her family.

"Ryan has created a world of enchantment that is both innately familiar and uniquely magical... Readers will be led into every rocky corner and wondrous ledge of Ryan's world through her vivid use of imagery, which keeps readers present on every page. She weaves so much relevant lyricism into this small, meaningful volume... 'Mañanaland manages to be both timely and timeless." -- New York Times

* "Ryan beautifully layers thought-provoking topics onto her narrative while keeping readers immersed in the story's world. Although set in the fictional country of Santa Maria, "somewhere in the Américas," the struggles of refugee immigrants and the compassion of those who protect the travelers feel very relevant. This tightly packed, powerful fantasy contains resonant truths." -- Kirkus Reviews, starred review

* "This richly tiered novel is, at its core, wrenchingly real... Newbery Honoree Ryan (Echo) infuses the soccer-loving boy's story with mystery based on local myth, closely guarded secrets, and a missing birth certificate. Lyrical allusions to the heartbreaking reality of life under repressive regimes and Max's belief in the promise of tomorrow fuse the title and plot of this compelling novel." -- Publishers Weekly, starred review

* "A richly satisfying novel that is both contemporary and timeless... The author seamlessly weaves into Max's journey important themes about asylum seekers and the people who help them." -- Shelf Awareness, starred review

"Mañanaland now, more than ever, in this riveting testament to heroism and compassion as only master storyteller Pam Muñoz Ryan can divine and deliver. "A luminous embodiment of hope." -- Rita Williams-Garcia, Newbery Honor-winning author of One Crazy Summer and Clayton Byrd Goes Underground

"Mañanaland is that rare gift of a book. It blends dream and truth into an enthralling fantasy that quietly shows us what it is like to be unwanted, searching for a place to belong. It is a story about choosing the very difficult path of kindness and courage, and about the faith of knowing with all our hearts that this is the path we all must take." -- Francisco X. Stork, award-winning author of Disappeared

"As always, Ryan's strength is in her visually expressive language... Poignant, memorable moments are created with just a few sentences... A gem of a story with timely messages... a required purchase." -- School Library Journal

"The fictional...setting and the promise of...Mañanaland make for an easier lens with which to view the refugee crisis for young readers, who may gain a greater understanding of real problems happening across the world through Max's tale." -- The Bulletin of the Center for Children's Book

"On the edge of fantasy and reality, Pam Munoz Ryan weaves an encouraging tale for those who seek refuge and the promise of a bright tomorrow... This would be an inspiring title for elementary and even middle school library to have in their collections to appeal to those readers who, like Max, are embarking on their own path to self-discovery." -- School Library Connection, Recommended


Awards and Praise for Echo:

* "The story of Otto and the cursed sisters honor timeless and traditional folktales [and] Ryan has created three contemporary characters who, through faith and perseverance, write their own happy endings, inspiring readers to believe they can do the same." -- School Library Journal, starred review

* "A grand narrative that examines the power of music to inspire beauty in a world overrun with fear and intolerance." -- Kirkus Reviews, starred review

* "Each individual story is engaging, but together they harmonize to create a thrilling whole." -- Publishers Weekly, starred review

"Ryan's ingenious plotting harmonizes as sweetly as the famed mouth harp itself, and her eloquent prose breathes life and energy into likable characters whose stories are individually compelling and historically resonant... A book of special distinction." -- The Bulletin of the Center for Children's Books, recommended

"Resilient, smart characters refuse to give in to circumstances seemingly beyond their control. Ryan's stories never fail to touch the heart." -- Voice of Youth Advocates

"Ryan's hypnotic text, inspired by the childhood of Pablo Neruda, is brought to life by the extraordinary art of Peter Sís." -- The New York Times

* "This book has all the feel of a classic, elegant and measured, but deeply rewarding and eminently readable." -- Booklist, starred review

"A phantasmagorical rumination on the childhood of the great Chilean poet Pablo Neruda is rooted in a belief that words possess the power to mend the spirit and change the world." -- Smithsonian Notable List