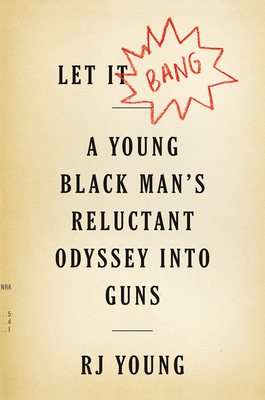 The quest, funny and searing, of a young man black man learning to shoot—a fascinating odyssey into race, guns, and self-protection in America

The most RJ Young knew about guns was that they could get him killed. Until, recently married to a white woman and in desperate need of a way to relate to his gun-loving father-in-law, Young does the unimaginable: he accepts Charles’s gift of a Glock.

Despite, or because of, the racial rage and fear he experiences among white gun owners (“Ain’t you supposed to be shooting a basketball?”), Young determines to get good, really good, with a gun. Let It Bang is the compelling story of the author’s unexpected obsession—he eventually becomes an NRA-certified pistol instructor—and of his deep dive into the heart of America's gun culture: what he sees as the domino effect of white fear, white violence, black fear, rinse, repeat. Young’s original reporting on shadow industries like US Law Shield, which insures and defends people who report having shot someone in self-defense, and on the newly formed National African American Gun Association, gives powerful insight into the dynamic. Through indelible profiles, Young brings us up to the current rocketing rise in gun ownership among black Americans, most notably women.

Let It Bang is an utterly original look at American gun culture from the inside, and from the other side—and, most movingly, the story of a young black man's hard-won nonviolent path to self-protection.

RJ Young’s writing has appeared in Reuters, the Oklahoman, and USA Today.  He is pulled over by the police more often than most white people change their sheets.  He lives in Tulsa, Oklahoma.  Learn more at rjyoungwrites.com.

“We need more books like this: personal, emotional meditations on gun ownership…showing us all the ways in which guns take on meaning for people, and what happens when those meanings collide.” –Pacific Standard   “RJ Young's Let It Bang is a penetrating and personal look at America's gun culture that hits the mark, finding both what brings us together as much as what tears us apart.”—Glenn Stout, author of Young Woman and the Sea and series editor, The Best American Sports Writing     “It's easy to stand outside the fray and criticize the gun-hung whites and radical rednecks defending the Second Amendment. It takes real courage to grab a pistol, head to the range, and try to understand where they're coming from. This is RJ Young's success with Let It Bang.”—Ben Montgomery, author of Grandma Gatewood’s Walk   “In the often muddled debate over gun possession and gun violence, Let It Bang resonates with common sense.”—Charles E. Cobb, Jr., author of This Nonviolent Stuff’ll Get You Killed: How Guns Made the Civil Rights Movement Possible   “Honest and heartbreaking, Young’s raw account of being a black gun owner in America will mesmerize readers.”—Publisher's Weekly —