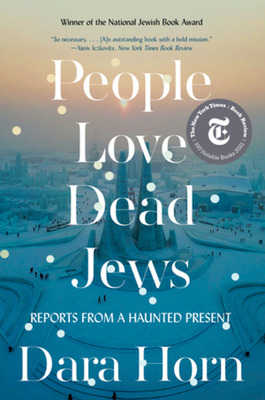 Weeks after finishing this collection of essays, I still feel wildly unqualified to offer anything resembling a "review". But weeks later, I'm still thinking about each of them, about the ways in which they asked me to re-assess some part of how I have thought about Jewish culture and history, and about how grateful I am for the education.

Finalist for the 2021 Kirkus Prize in Nonfiction

A startling and profound exploration of how Jewish history is exploited to comfort the living.

Renowned and beloved as a prizewinning novelist, Dara Horn has also been publishing penetrating essays since she was a teenager. Often asked by major publications to write on subjects related to Jewish culture—and increasingly in response to a recent wave of deadly antisemitic attacks—Horn was troubled to realize what all of these assignments had in common: she was being asked to write about dead Jews, never about living ones. In these essays, Horn reflects on subjects as far-flung as the international veneration of Anne Frank, the mythology that Jewish family names were changed at Ellis Island, the blockbuster traveling exhibition Auschwitz, the marketing of the Jewish history of Harbin, China, and the little-known life of the "righteous Gentile" Varian Fry. Throughout, she challenges us to confront the reasons why there might be so much fascination with Jewish deaths, and so little respect for Jewish lives unfolding in the present.

Horn draws upon her travels, her research, and also her own family life—trying to explain Shakespeare’s Shylock to a curious ten-year-old, her anger when swastikas are drawn on desks in her children’s school, the profound perspective offered by traditional religious practice and study—to assert the vitality, complexity, and depth of Jewish life against an antisemitism that, far from being disarmed by the mantra of "Never forget," is on the rise. As Horn explores the (not so) shocking attacks on the American Jewish community in recent years, she reveals the subtler dehumanization built into the public piety that surrounds the Jewish past—making the radical argument that the benign reverence we give to past horrors is itself a profound affront to human dignity.

Now including a reading group guide.

Dara Horn is the author of five novels and was one of Granta’s Best Young American Novelists. She has taught Jewish literature at Harvard, Sarah Lawrence College, and Yeshiva University. She lives in New Jersey with her family.

This is a beautiful book, and in its particular genre—nonfiction meditations on the murder of Jews, particularly in the Holocaust, and the place of the dead in the American imagination—it can have few rivals. In fact, I can’t think of any.
— Martin Peretz - Wall Street Journal

This is one of the best books of essays about Jewish history and culture that I have read in years.
— David Herman - The Jewish Chronicle

“So necessary and so disquieting…People Love Dead Jews is an outstanding book with a bold mission. It criticizes people, artworks, and public institutions that few others dare to challenge.”

Horn is clearly exhausted about thinking about dead Jews, and about antisemitism, and you can feel her emotion through the page. But she channels the emotion to weave together a large amount of stories — from Russian Jews living in China to Daf Yomi — and what results is a compelling series of essays.
— Emily Burack - Alma

People Love Dead Jews is, of all things, a deeply entertaining book, from its whopper of a title on. Horn’s sarcasm is bracing, reminding us that the politics of Jewish memory often becomes an outrageous marketing of half-truths and outright lies... People Love Dead Jews reminds us that Jewishness is not a museum, a graveyard, or a heritage site but a lively ongoing conversation at a long table that stretches before and behind us. Come out of hiding, Horn urges us, it’s time to take part in Jewish life.

Weav­ing togeth­er his­to­ry, social sci­ence, and per­son­al sto­ry, she asks read­ers to think crit­i­cal­ly about why we ven­er­ate sto­ries and spaces that make the destruc­tion of world Jew­ry a com­pelling nar­ra­tive while also min­i­miz­ing the cur­rent cri­sis of anti­semitism... Peo­ple Love Dead Jews offers no defin­i­tive solu­tion to the para­dox it unfolds. Horn leaves the read­er with sev­er­al inter­wo­ven expla­na­tions, each of which lead us to con­front the dark real­i­ty that Jew­ish deaths make for a com­pelling edu­ca­tion­al nar­ra­tive, while fac­ing the anti­semitism of the present demands a com­mit­ment to equal­i­ty that the world remains unable to embrace.

How can a book filled with anger, a book about anti-Semitism and entitled People Love Dead Jews, be delectable at the same time? The novelist Dara Horn has done it, combining previously published pieces in a work that is far greater than the sum of its parts.

The questions and ideas raised by Horn in People Love Dead Jews are — like the Yiddish stories she writes about — endless and defiant of neat solutions. But there is comfort to be found, in the most Jewish ways, in her humour and clear-eyed critical thinking.

Barely concealed behind the breezy-sounding words ‘People Love,’ cannily reminiscent of a soap ad, is the implicit understanding that ‘people don’t love live Jews’ and even its complement, ‘people love Jews dead.’ In her latest masterpiece, Horn means them all, and more. The best-selling novelist, professor of Jewish literature, and devoted mother of four does not hesitate to confront this hypocrisy head-on... Horn diagnoses with astonishing accuracy the origins, symptoms, and intransigence of the spiritual cancer at the heart of modern culture.
— Juliana Geran Pilon - Israel Journal of Foreign Affairs

Horn herself [is] sometimes a witness, at others providing insightful commentary full of anguish and rage. This is not an easy book to read. But wrestling with Horn’s ideas makes for a rich experience. In all, a profound lament.
— Ilene Cooper - Booklist

Dara Horn proposes a disturbingly fresh reckoning with an ancient hatred, refusing all categories of victimhood and sentimentality. She offers a passionate display of the self-renewing vitality of Jewish belief and practice. Because antisemitism is a Christian problem more than a Jewish one, Christian readers need this book. It is urgently important.
— James Carroll, author of The Truth at the Heart of the Lie

Dara Horn’s thoughtful, incisive essays constitute a searing investigation of modern-day antisemitism, in all its disguises and complications. No matter where Horn casts her acute critical eye—from the ruins of the Jewish community in Harbin, China, to the tragedy at Pittsburgh’s Tree of Life synagogue—the reports she brings back are at once surprising and enlightening and necessary.
— Ruth Franklin, author of Shirley Jackson and A Thousand Darknesses

Dara Horn has an uncommon mastery of the literary essay, and she applies it here with a relentless, even furious purpose. Horn makes well-worn debates—on Anne Frank and Hannah Arendt, for instance—newly provocative and urgent. Her best essays are by turns tragic and comic, and her magnificent mini biography of Varian Fry alone justifies paying the full hardcover price.
— Tom Reiss, Pulitzer Prize–winning author of The Black Count: Glory, Revolution, Betrayal, and the Real Count of Monte Cristo

To see what is in front of one’s nose needs a constant struggle, George Orwell told us. Dara Horn has engaged that struggle, and in People Love Dead Jews she explains why so many prefer the mythologized, dead Jewish victim to the living Jew next door. It’s gripping, and stimulating, and it’s the best collection of essays I have read in a long, long time.

— Mark Oppenheimer, author of Squirrel Hill: The Tree of Life Synagogue Shooting and the Soul of a Neighborhood