Black Snow: Curtis LeMay, the Firebombing of Tokyo, and the Road to the Atomic Bomb (Hardcover) 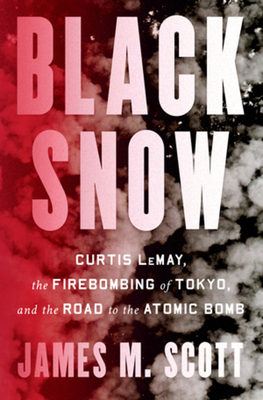 “Black Snow brilliantly vivifies the horrific reality of the most destructive air attack in history, against Tokyo on the night of March 9-10, 1945. James Scott deftly employs sharply etched portraits of individuals of all stations and nationalities to survey the global, technological, and moral backdrop of the cataclysm, including the searing experiences of Japanese trapped in a gigantic firestorm. This riveting account illuminates an historical moment of profound contemporary relevance.” —Richard B. Frank, author of Tower of Skulls: A History of the Asia-Pacific War: July 1937–May 1942

Seven minutes past midnight on March 10, 1945, nearly 300 American B-29s thundered into the skies over Tokyo. Their payloads of incendiaries ignited a firestorm that reached up to 2,800 degrees, liquefying asphalt and vaporizing thousands; sixteen square miles of the city were flattened and more than 100,000 men, women, and children were killed.

Black Snow is the story of this devastating operation, orchestrated by Major General Curtis LeMay, who famously remarked: “If we lose the war, we’ll be tried as war criminals.” James M. Scott reconstructs in granular detail that horrific night, and describes the development of the B-29, the capture of the Marianas for use as airfields, and the change in strategy from high-altitude daylight “precision” bombing to low-altitude nighttime incendiary bombing. Most importantly, the raid represented a significant moral shift for America, marking the first time commanders deliberately targeted civilians which helped pave the way for the atomic bombing of Hiroshima and Nagasaki five months later.

Drawing on first-person interviews with American pilots and bombardiers and Japanese survivors, air force archives, and oral histories never before published in English, Scott delivers a harrowing and gripping account, and his most important and compelling work to date.

James M. Scott is the author of Black Snow, Rampage, and Target Tokyo, a Pulitzer Prize finalist. He lives in Charleston, South Carolina.

Powerful and compelling narrative history.... Scott vividly describes the horrific impact of the inferno on the city and its residents.
— Lawrence D. Freedman - Foreign Affairs

Riveting and broadly researched.... Scott is a formidable historian of the Pacific War ... [and] talented as both reporter and storyteller.... This book is required reading for anyone with even a passing interest in World War II and the Pacific Theater.
— Bob Carden - Boston Globe

Compelling and ambitious.... Through the strength of his archival research and interviews with Japanese survivors, Scott puts readers in the hell that was Tokyo that day as the payloads from 279 B-29s set off ferocious fire storms that swept through a city where homes became fuel for the inferno.
— Hal Bernton - Seattle Times

James Scott tackles a controversial subject with gripping, fresh details.... Black Snow is destined to become a benchmark for students of the Pacific war to fully comprehend the profoundly difficult tactics employed by the United States to finally close the doors on the mighty Japanese war machine.

Tells us with great insight and detail what went into America’s thinking more than 75 years ago when it decided to target Japan’s citizens in World War II.... Today, the issues Scott has so skillfully raised in Black Snow are most visible in the war of aggression Russia is waging against Ukraine.

What’s truly excellent about this book is the arc of it, the well-plotted background behind the method and the madness of the decision to firebomb civilians.... While there are certainly more aspects of World War II which would benefit from Scott’s gifts, this feels like a well-earned culmination.
— Jonathan Sanchez - Charleston Post & Courier

Black Snow is fine history and gripping narrative. I recommend it to all interested in World War II, military history, military innovation and the ethics of war.

James M. Scott brings to life with painstaking detail and humanity the terror and plight and hopes of Japanese citizens in their cities, and US pilots in the air—their duties, their misgivings, their conflicted reactions, their sense of victory, and their moral survival off that victory. You realize you’ve never read this story before in this way, with these long views of history and such collar-grabbing intensity. Black Snow raises profound questions about how peace is made during one of America’s most turbulent periods on the world stage, and it speaks clearly to us today. You won’t put it down.

Black Snow brilliantly vivifies the horrific reality of the most destructive air attack in history, against Tokyo on the night of March 9-10, 1945. James Scott deftly employs sharply etched portraits of individuals of all stations and nationalities to survey the global, technological, and moral backdrop of the cataclysm, including the searing experiences of Japanese trapped in a gigantic firestorm. This riveting account illuminates an historical moment of profound contemporary relevance.

James Scott’s fine new book concerns itself with many incendiary things, but fundamentally it addresses perhaps the most incendiary question to be found within the ethics (if there are any) of warfare: Should civilians be considered legitimate targets? Scott explores this tricky topic with an appropriate sense of gravitas, with a storytelling verve, with a mastery of the subject matter, and, most important of all, with a searching heart.
— Hampton Sides, best-selling author of Ghost Soldiers and On Desperate Ground

The firebombing of Japan is one of the most gut-wrenching and controversial chapters in modern history. James M. Scott’s Black Snow is a brilliant, fast moving, utterly absorbing, and devastating account of the full price of victory in the Pacific.

A book as valuable as it is engrossing.…An account filled with sharp detail that never slows the headlong narrative pace. Black Snow is at once an adventure story, a technological thriller, and a harrowing reminder of the human cost of total war in our modern age.

Without sparing the suffering of its Japanese victims, James M. Scott narrates in Black Snow the real and remorseless saga.…Scott’s prodigious research…as well as his mastery of the telling detail, will make this a classic history of war: a tale of fantastic military hubris and its ultimate, catastrophic cost to a people who had literally sown the whirlwind. Unputdownable.

— Nigel Hamilton, author of the FDR at War trilogy

In this excellent follow-up to Rampage and Target Tokyo, Scott evenhandedly examines the controversy surrounding the firebombing of Japanese cities and offers a sympathetic rendering of the devastating effects of those bombings on the civilian population.... Scott alternates his page-turning account of the air operations with devastating on-the-ground eyewitness reports of survivors, providing a kaleidoscopic portrait of both sides in a cataclysmic conflict. A top-shelf World War II history told with meticulous research and considerable heart.

Meticulously researched and finely written.... Anyone who wants to understand the last year of the air war in the Pacific and the bomber commander’s role should read this excellent book.
— Library Journal, starred review