Black Skinhead: Reflections on Blackness and Our Political Future (Hardcover) 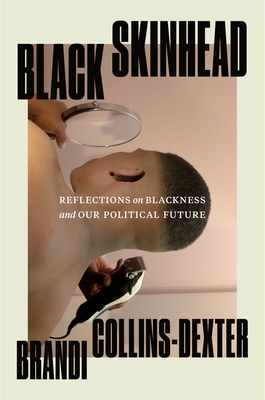 "Political activist Collins-Dexter’s essay collection is timely as well as pointed. In it, she argues that Democrats have taken Black voters for granted, and that the consequences of this mistake have already begun — and will accelerate."
—The New York Times,"15 Works of Nonfiction to Read This Fall"

For fans of Bad Feminist and The Sum of Us, Black Skinhead sparks a radical conversation about Black America and political identity.

In Black Skinhead, Brandi Collins-Dexter, former Senior Campaign Director for Color Of Change, explores the fragile alliance between Black voters and the Democratic party. Through sharp, timely essays that span the political, cultural, and personal, Collins-Dexter reveals decades of simmering disaffection in Black America, told as much through voter statistics as it is through music, film, sports, and the baffling mind of Kanye West.

While Black Skinhead is an outward look at Black votership and electoral politics, it is also a funny, deeply personal, and introspective look at Black culture and identity, ultimately revealing a Black America that has become deeply disillusioned with the failed promises of its country.

We had been told that everything was fine, that America was working for everyone and that the American Dream was attainable for all. But for those who had been paying attention, there had been warning signs that the Obamas’ version of the American Dream wasn’t working for everyone. That it hadn’t been working for many white Americans was immediately and loudly discussed, but the truth—and what I set out to write this book about—was that it hadn’t been working for many Black Americans either. For many, Obama’s vision had been more illusion than reality all along.

When someone tells you everything is fine, but around you, you see evidence that it’s not, where will the quest to find answers lead you? As I went on the journey of writing this book, I found a very different tale about Black politics and Black America, one that countered white America’s long-held assumption that Black voters will always vote Democrat—and even that the Democratic party is the best bet for Black Americans.

Brandi Collins-Dexter is the former Senior Campaign Director at Color Of Change, where she oversaw the media, culture, and economic justice departments. She led a number of successful corporate accountability campaigns ranging from getting R. Kelly dropped from RCA to pressuring financial companies to pull funding from over 100 hate groups. She has testified in front of Congress on issues related to race, technology and corporate accountability. Brandi is a regular commentator in the media on racial justice and was named a 2017 “person to watch” by The Hill and one of the 100 most influential African Americans by The Root in 2019. She holds a B.A. in history from Agnes Scott College, and a J.D. from University of Wisconsin-Madison Law School. She is a visiting fellow at the Harvard Kennedy School’s Shorenstein Center on Media, Politics and Public Policy. Brandi comes from a long line of South Side Chicagoans and currently lives in Baltimore with her husband David and their cat, Ella.

*Named a Best Book of September 2022 by The New York Times, Chicago Tribune, Kirkus, and Ms. Magazine, and Recommended by USA Today, POLITICO, and Oprah Daily*

"Political activist Collins-Dexter’s essay collection is timely as well as pointed. In it, she argues that Democrats have taken Black voters for granted, and that the consequences of this mistake have already begun — and will accelerate."
—The New York Times,"15 Works of Nonfiction to Read This Fall"

"Brandi Collins-Dexter — a scholar, activist and overall poignant voice on race and accountability (as well as South Sider) — writes in Black Skinhead that she found in Kanye West a vessel for thinking about Black voters and rising disillusionment with Democrat politics. From there she spins a vibrant history of Black voters and assumptions."
—The Chicago Tribune

“How can the most reliable Democratic voters be the most dissatisfied with the Democratic Party? Why does the political class obsess over the shifting loyalties of white voters but ignore Black voters who are experiencing the same doubts? To explain why—and what to do about it—Brandi Collins-Dexter seamlessly weaves political analysis with cultural criticism, historical perspectives with deeply personal stories. She not only shows us what Black voters are yearning for, she tells us what will happen if we do not pay attention.”
—Heather McGhee, New York Times bestselling author of The Sum of Us

"Brandi Collins-Dexter has written the book I wanted to read about Black politics in America not just in the wake of Donald Trump's presidency, but after the elections of Barack Obama and Joe Biden failed to deliver material results for Black people. With nuance, pathos, and an unflinching honesty, Collins-Dexter carefully explores the "unsatisfied" and "unsettled" relationship between the Democratic Party and the Black voters (and would-be voters) it takes for granted. She seamlessly and deftly weaves between what she's learned from thinking partners as different as Kanye West, his mother Donda West, historian Leah Wright Rigueur, activist Kwame Ture, Black Trump supporters, radio host Charlamagne tha God, the Brotherhood of Sleeping Car Porters and—most personally—her late, basketball-dribbling father. The essays of Black Skinhead will haunt you, inspire you and make you consider contemporary Black politics in America in profoundly new ways."
—Steven W. Thrasher, PhD, author of The Viral Underclass

“An influential media commentator on racial justice explores politics and Black voters in this sharp blend of memoir and cultural criticism… Featuring a vivid mix of hard data, anecdotal details, and scholarly research, this book is a must-read for anyone interested in politics and Black lives in America. A remarkable work that leaves us feeling hopeful for change.”
–Kirkus Reviews, starred review

“Black Skinhead is the story we need, right now, of how Black civil society is disintegrating—and how we ignore it at our peril. Sharp, witty, poignant and honest, Black Skinhead is a tale of our generation, and points to what we might do to stop ourselves from careening off a cliff of nihilism. In this political age, there is no more important task.”
—Alicia Garza, principal of Black Futures Lab, co-creator of #BlackLivesMatter, and author of The Purpose of Power

“Black Skinhead masterfully weaves together a compelling personal story about coming of age as an activist disenchanted with the complacent attitude of politicians toward the needs of Black Americans. Brandi Collins-Dexter guides the reader to see the world as she sees it: lyrical, political, and cynical, at times. She does not take democracy in America as inevitable, but rather as an ideal to be fought for, where all political parties must continue to earn the votes of Black Americans. If you’re disheartened by party posturing, Black Skinhead is the political education you’ve been waiting for.”
—Dr. Joan Donovan, research director at Harvard University’s Shorenstein Center and author of Meme Wars

“Brandi Collins-Dexter knows how important it is to understand who Black people really are. Her eye-opening research, analysis, and storytelling reveal important undercurrents in Black culture, anticipating the major political waves they will soon become. Black Skinhead challenges every assumption and shows us how to see past the fiction of who politicians and pundits want us to be. This book cannot be ignored.”
—Rashad Robinson, president of Color Of Change

"In her powerful essays, Collins-Dexter—an influential media commentator and former senior campaign director for Color of Change—explores the fragile alliance between the Democratic Party and Black voters in a mix of memoir, research, and analysis. Recommended for everyone interested in the U.S. political landscape, Black lives, and identity in America."
—Booklist

“Black Skinhead should be a wake-up call to politicians and voters alike. Brandi Collins-Dexter challenges us to journey into the worlds of Black voters and people across the political spectrum. There were times where it felt uncomfortable, but the implications unearthed throughout the book must not be ignored.”
—Michael Tubbs, former mayor of Stockton, CA and author of The Deeper the Roots

"Seamlessly balancing the personal, political, and cultural, and enlivened with a sharp sense of wit, these standout pieces strike an essential note of warning for Democrats."
—Publishers Weekly, starred review