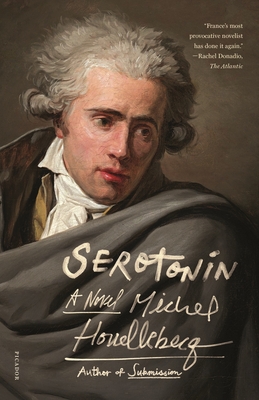 Michel Houellebecq’s Serotonin is a caustic, frightening, hilarious, raunchy, offensive, and politically incorrect novel about the decline of Europe, Western civilization, and humanity in general.

Deeply depressed by his romantic and professional failures, the aging hedonist and agricultural engineer Florent-Claude Labrouste feels he is “dying of sadness.” He hates his young girlfriend, and the feeling is almost certainly mutual; his career is pretty much over; and he has to keep himself thoroughly medicated to cope with day-to-day life.

Suffocating in the rampant loneliness, consumerism, hedonism, and sprawl of the city, Labrouste decides to head for the hills, returning to Normandy, where he once worked promoting regional cheeses and where he was once in love, and even—it now seems—happy. There he finds a countryside devastated by globalization and by European agricultural policies, and encounters farmers longing, like Labrouste himself, for an impossible return to a simpler age.

As the farmers prepare for what might be an armed insurrection, it becomes clear that the health of one miserable body and of a suffering body politic are not so different, and that all parties may be rushing toward a catastrophe that a whole drugstore’s worth of antidepressants won’t make bearable.

Shaun Whiteside is a Northern Irish translator of French, Dutch, German, and Italian literature. He has translated many novels, including Manituana and Altai by Wu Ming, The Weekend by Bernhard Schlink, and Magdalene the Sinner by Lilian Faschinger, which won him the Schlegel-Tieck Prize for German Translation in 1997.

Michel Houellebecq is a French novelist, poet, and literary critic. His novels include the international bestseller The Elementary Particles and The Map and the Territory, which won the 2010 Prix Goncourt. He lives in France.

"Like nearly every Houellebecq novel, “Serotonin” should be stamped on its spine with a tiny skull and crossbones, like you used to see on bottles of poison, to keep away the devout, the unsuspecting and the pure of heart . . . Houellebecq arrives in your life “waving genitals and manuscripts,” to borrow a phrase from “Howl.” Don’t feed his characters. They will keep coming around." —Dwight Garner, New York Times

"Houellebecq once again puts on the mantle of a literary prophet . . . Serotonin challenges its readers to soften their hearts toward those among us who are refused official pity — the sorts of people, dairy farmers, gilets jaunes, and lonely white quadragenarian men included, who seem less likely to evoke compassion in the present political climate. Like all of Houellebecq’s work, Serotonin is, at times, hilarious, sexually graphic, and shockingly irreverent. But it is also a novel of moral seriousness, daring us to increase our compassion in proportion to the seeming loathsomeness of those to whom it is owed." —Louis Betty, Los Angeles Review of Books

"France’s most provocative novelist has done it again . . . Although it’s a sophisticated work of literature written in a mournful key, Serotonin might as well have a jacket blurb from Steve Bannon . . . The work’s themes include the effects of antidepressants on the male libido, the difficulty of sustaining meaningful relationships, and the impossibility of finding happiness, let alone spiritual satisfaction, in a consumer society. Consider it as The Magic Mountain for the post-Brexit era." —Rachel Donadio, The Atlantic

"Houellebecq’s disdain for the emptiness of modern western life often leaves him spookily ahead of the game . . . Critics accuse Houellebecq of nihilism. Not so: he is a moral conservative behind all the libertine swagger and stone-faced mischief." —Boyd Tonkin, Financial Times

"Despite so much that alienates . . . Houellebecq is a seductive, talented writer, and he remains strangely prophetic about current issues (in this case, protests against free trade). The result is an unexpected page-turner about the dairy trade." —Publisher's Weekly

"The chemical serotonin famously produces feelings of happiness and well-being in humans—not, on the whole, something that can be said of the work of Michel Houellebecq, France’s most successful literary export. Sure enough, despite its title, his latest novel is another spectacularly pessimistic meditation on the simultaneous decline of a male narrator and of western civilisation in general. Not many readers will necessarily embrace Houellebecq’s world view... That, I would firmly suggest, is beside the point." —James Walton, The Times

"[Serotonin] is engrossing; it is cartoonishly violent; it is profane; it is perverse . . . It is cloaked in the garment of melancholy that puts one in mind of walking for hours in a drenched hoodie after an autumn downpour." —Christian Lorentzen, BookForum

"Michel Houellebecq might be the most brilliant and maddening French writer alive . . . Houellebecq is always worth reading because he confronts his readers with fundamental questions. Is selfless love possible? After a certain age, is human life worthwhile?" —Paul W. Gleason, National Book Review

"We are living in the imagination of Michel Houellebecq . . . Indeed, the rise of populism in the U.S. and Europe might as well have been choreographed by Houellebecq . . . Houellebecq has refined his style, developing richer plot points and keener social commentary. Society has begun to catch up to Houellebecq’s long-standing beefs with the sexual revolution, and whereas his invectives against neoliberalism seemed out of touch in the heady atmosphere of the end-of-history 1990s, they are now more apt than ever. In Serotonin, we are in a hell of our own, which we have built to our own taste." —Daniel Tenreiro, National Review

"As audacious as it is effective, this may be Houellebecq’s most impressive work yet." —Josh Allen, World Literature Today

"From the opening of Serotonin it is clear that we are in safe Houellebecqian hands . . . Houellebecq writes with such facility and humour that it can look easy. Yet how many other novelists can make you moan, laugh and keep reading like he does? He deserves his reputation as the novelist who most understands our age, most reviles it, and may well come to represent it best." —Douglas Murray, The Spectator

"Very funny and always enjoyable . . . Yet the anger he expresses here about the destruction of the deep France that he loves could not be more to the point, reflecting deep despair about what is happening now." —Douglas Murray, Evening Standard

"This most prescient of novelists—who foresaw Islamist terror in holiday resorts in Muslim countries in Platform (2001), and envisaged Islamic government in France in Submission (2015), just before the Charlie Hebdo attacks—is addressing directly the discontents of rural France underpinning the Gilets Jaunes movement. No novel has been more pertinent this year . . . Houellebecq has always been shamelessly clear about love and sex, and the chances of any long-lived happiness in a society in which youth and desirability are traded in a free market." —David Sexton, The Evening Standard

"Any new book by Houellebecq is guaranteed to make waves, and Serotonin is no exception . . . A bleak, uncompromising novel. But it also feels like an important one, asking some necessary questions in characteristically mordant fashion." —Max Davidson, The Mail on Sunday