An Elephant in My Kitchen: What the Herd Taught Me About Love, Courage and Survival (Elephant Whisperer #2) (Paperback) 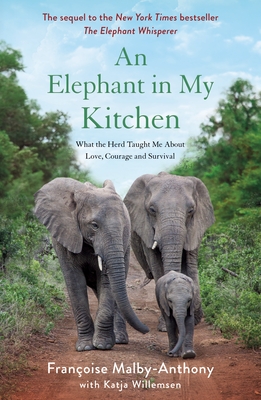 This is book number 2 in the Elephant Whisperer series.

A heart-warming sequel to the international bestseller The Elephant Whisperer, by Lawrence Anthony's wife Françoise Malby-Anthony.

A chic Parisienne, Françoise never expected to find herself living on a South African game reserve. But then she fell in love with conservationist Lawrence Anthony and everything changed. After Lawrence’s death, Françoise faced the daunting responsibility of running Thula Thula without him. Poachers attacked their rhinos, their security team wouldn’t take orders from a woman and the authorities were threatening to cull their beloved elephant family. On top of that, the herd’s feisty new matriarch Frankie didn’t like her.

In this heart-warming and moving book, Françoise describes how she fought to protect the herd and to make her dream of building a wildlife rescue center a reality. She found herself caring for a lost baby elephant who turned up at her house, and offering refuge to traumatized orphaned rhinos, and a hippo called Charlie who was scared of water. As she learned to trust herself, she discovered she’d had Frankie wrong all along.

Filled with extraordinary animals and the humans who dedicate their lives to saving them, An Elephant in My Kitchen is a captivating and gripping read.

Françoise Malby-Anthony was born in the south of France, brought up in Paris, and has lived in South Africa since 1987. She founded the Thula Thula game reserve in 1998 with her late husband, the renowned conservationist and bestselling author Lawrence Anthony. When Lawrence died in 2012, Françoise took over the running of the reserve and is equally passionate about conservation. She was the driving force behind setting up a wildlife rehabilitation centre at the reserve to care for orphaned animals. Her first book, An Elephant in My Kitchen, was an international bestseller.

KATJA WILLEMSEN was born in Holland, grew up in South Africa and now lives in France. A full-time writer, she is the author of the thriller Shepherd’s Prayer. An Elephant in My Kitchen is her first work of nonfiction.

"An Elephant in My Kitchen is a moving and often amusing account of a life filled with compassion and resolve." —Wall Street Journal

"The writing is full of vivid descriptions that place readers in the middle of the action, making the book difficult to put down. An engrossing eye-opener on the fragility of South Africa's fauna." —Kirkus