Night of the Mannequins: A Tor.com Original (Paperback) 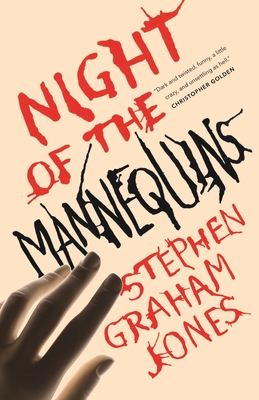 Award-winning author Stephen Graham Jones returns with Night of the Mannequins, a contemporary horror story where a teen prank goes very wrong and all hell breaks loose: is there a supernatural cause, a psychopath on the loose, or both?

We thought we'd play a fun prank on her, and now most of us are dead.

One last laugh for the summer as it winds down. One last prank just to scare a friend. Bringing a mannequin into a theater is just some harmless fun, right? Until it wakes up. Until it starts killing.

Luckily, Sawyer has a plan. He’ll be a hero. He'll save everyone to the best of his ability. He'll do whatever he needs to so he can save the day. That's the thing about heroes—sometimes you have to become a monster first.

"Suffused with questions about the nature of change and friendship, “Night of the Mannequins” is a fairy tale of impermanence showcasing Graham Jones’s signature style of smart, irreverent horror." —The New York Times

STEPHEN GRAHAM JONES was raised as pretty much the only Blackfeet in West Texas - except for his dad and grandma and aunts and uncles and cousins. He now lives in Boulder, Colorado with his wife, a couple kids, and too many old trucks. Between West Texas and now, he's published more than twenty books, including the novels The Fast Red Road, Ledfeather, and Mongrels, and the short story collections After the People Lights Have Gone Off, States of Grace, and The Ones that Got Away.

Stephen’s been the recipient of a National Endowment for the Arts Fellowship in Fiction, the Texas Institute of Letters Jesse Jones Award for Fiction, the Independent Publishers Awards for Multicultural Fiction, three This is Horror awards, and he’s made Bloody Disgusting’s Top Ten Novels of the Year. Stephen teaches in the MFA programs at University of Colorado at Boulder and University of California Riverside-Palm Desert.

"Suffused with questions about the nature of change and friendship, “Night of the Mannequins” is a fairy tale of impermanence showcasing Graham Jones’s signature style of smart, irreverent horror." —The New York Times

"A funny and harrowing parable about adolescent alienation that shows Jones in top form." —The Toronto Star

"Night of the Mannequins is dark and twisted, funny, a little crazy, and unsettling as hell." —Christopher Golden

"Sly, surprising psychic sleight-of-hand, in a tale of teenage madness where the next plastic face might be your own." —John Skipp

"Wicked and wry, this is a terrific story by one of my favorite writers, Stephen Graham Jones. Tip-top with a twist of dread."—Joe R. Lansdale

"Propulsive and poignant, capturing the mundane terror of adolescence, and adding that ever-so-essential dab of killer mannequin." —Sarah Langan

"Stephen Graham Jones’s range and his understanding of horror in fiction and film is staggering. In this novella he juggles—sometimes in very sly ways—slasher stories, coming of age horror, traditions of madness and unreliability, and Kaiju to create an amazingly speedy, voice-driven read that's tons of fun. Each new book of his gives his own take on a different facet of horror, and together they all add up to something really expansive and original." —Brian Evenson, author of Song for the Unraveling of the World

"A hotter voice in horror would be hard to find these days, and Graham Jones does not disappoint, delivering another masterpiece. Give to fans of slasher or serial killer tales." —Library Journal, starred review

"Jones tiptoes the border between supernatural and psychological horror in this weird and wild novella... Balancing horror and humor, this novella puts a clever modern twist on a classic monster story." —Publishers Weekly

"Readers will delight more than once in the realization that they might be reading a different story from the one they thought was unfolding... trust Jones and enjoy the ride." —Shelf Awareness