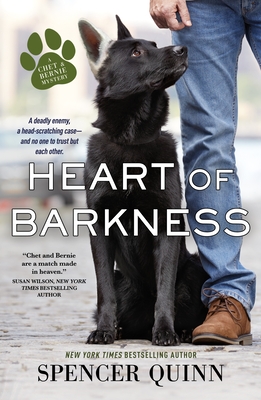 This is book number 9 in the A Chet & Bernie Mystery series.

Chet the dog, “the most lovable narrator in all of crime fiction” (Boston Globe), and P.I. Bernie encounter heartache and much worse in the world of country music. They’re both music lovers, so when Lotty Pilgrim, a country singer from long ago, turns up at a local bar, they drive out to catch her act. Bernie’s surprised to see someone who was once so big performing in such a dive, and drops a C-note the Little Detective Agency can’t afford to part with into the tip jar. The C-note is stolen right from under their noses – even from under Chet’s, the nose that misses nothing – and before the night is over, it’s stolen again.

Soon they’re working the most puzzling case of their career, a case that takes them back in time in search of old border-town secrets, and into present-day danger because powerful people want those secrets to stay hidden. Chet and Bernie find themselves sucked into a real-life murder ballad where they have no one to trust but each other.

Spencer Quinn is the pen name for Peter Abrahams, the Edgar-winning, New York Times and USA Today bestselling author of the Chet and Bernie mystery series, as well as the #1 New York Times bestselling Bowser and Birdie series for middle-grade readers. He lives on Cape Cod with his wife Diana and dog Pearl.

“Chet, the dog, and Bernie, the PI, are a team made in mystery series heaven. Would that we all were as infallible in our dogs' eyes as Bernie is in Chet's.” —Susan Wilson, New York Times bestselling author of Two Good Dogs on Heart of Barkness

“Nothing short of masterful…. Sequels are a given, and a must.” —Los Angeles Times on Dog On It