Making a Psychopath: My Journey into Seven Dangerous Minds (Hardcover) 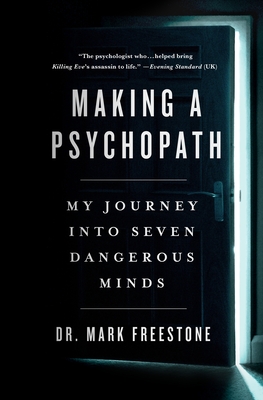 Find out what truly creates and defines a psychopath, from the leading expert who helped to create Killing Eve's Villanelle.

Dr. Mark Freestone has worked on some of the most interesting, infamous and disturbing cases of psychopathology in recent years. His expertise has led to a consultant role on several TV series, helping them accurately portray their fictional villains. Now, he shares his phenomenal insight into the minds of some of the world's most violent real-life criminals.

Angela "the Remorseless", a rare female psychopath, casually confessed to murder on national television without a hint of regret. Danny "the Borderline" switched from grandiosity to rage to despair within minutes and killed his defenseless friend without explanation. Tony "the Conman" preferred charm, intimidation and sexual abuse over physical violence and once tried to dupe someone into buying the Eiffel Tower. Jason "the Liar" had a fantasy life that led to vicious murders around Europe and preyed on those who see the good in people. Case by fascinating case, get to know seven of the most dangerous minds that Dr. Freestone has encountered over the last 15 years. These are up-close accounts of some of the most psychopathic criminals, and of what can happen if you fall victim to their supreme powers of manipulation.

Exploring the many factors that make a psychopath, the complexities and contradictions of their emotions and behavior, as well as an examination of how the lives of psychopaths develop inside and outside the institutions that are supposed to contain them, Making a Psychopath opens up a window into the world of those who operate in a void of human emotion—and what can be done to control them.

Mark Freestone, PhD is a Senior Lecturer in the Centre for Psychiatry, Queen Mary University of London. He has worked in prisons and forensic mental health services for over 15 years as a researcher and clinician, including in the High Secure Category A prison estate, which houses some of the UK's most notorious and high-risk criminals. He has also worked at Rampton and Broadmoor Special Hospitals - institutions which have housed the likes of the Yorkshire ripper Peter Sutcliffe, Moors Murderer Ian Brady, Levi Bellfield and Charles Bronson - as part of the Dangerous and Severe Personality Disorder (DSPD) Programme. He is a consultant to BBC America's Killing Eve, an editor of the Journal of Forensic Psychiatry and Psychology and currently an advisor to NHS England on services for men and women with a diagnosis of severe personality disorder. He has published several academic articles on personality disorder, psychopathy and violence risk, but Making a Psychopath is his first book.

"Brisk... a fine introduction to the workings of psychopathy." --Publishers Weekly

"The psychiatrist who created Killing Eve's anti-heroine." —The Telegraph (UK)

"Freestone engagingly describes seven distinctly different dicey characters...Putting these subjects in motion in situations and relationships effectively brings them alive. It's not hard to envision people we may know who are like them." —Psychology Today