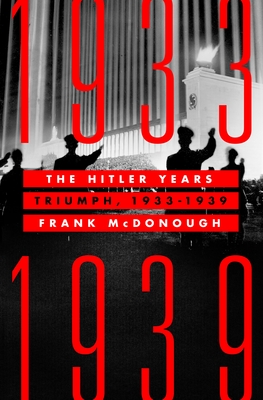 From historian Frank McDonough, the first volume of a new chronicle of the Third Reich under Hitler's hand.

On January 30th, 1933, Adolf Hitler was appointed the German Chancellor of a coalition government by President Hindenburg. Within a few months he had installed a dictatorship, jailing and killing his leftwing opponents, terrorizing the rest of the population and driving Jews out of public life. He embarked on a crash program of militaristic Keynesianism, reviving the economy and achieving full employment through massive public works, vast armaments spending and the cancellations of foreign debts. After the grim years of the Great Depression, Germany seemed to have been reborn as a brutal and determined European power.

Over the course of the years from 1933 to 1939, Hitler won over most of the population to his vision of a renewed Reich. In these years of domestic triumph, cunning maneuvers, pitting neighboring powers against each other and biding his time, we see Hitler preparing for the moment that would realize his ambition. But what drove Hitler's success was also to be the fatal flaw of his regime: a relentless belief in war as the motor of greatness, a dream of vast conquests in Eastern Europe and an astonishingly fanatical racism.

Professor FRANK McDONOUGH is an internationally renowned expert on the Third Reich and has written many critically acclaimed books on the topic, including Opposition and Resistance in Nazi Germany and The Gestapo. He studied history at Balliol College, Oxford, and gained a Ph.D. from Lancaster University. He has appeared on TV and radio numerous times and was featured in a six-part series, Nazi Secrets, for National Geographic in 2012 and a ten-part series, The Rise of the Nazi Party, for the Discovery Channel in 2014. The History Network placed McDonough’s Twitter account, @FXMC1957, in the Top 30 Most Popular Historical Twitter Accounts in the World.

"A very well-written and lavishly illustrated history on the rise of Hitler (from 1933 to 1939). With an eye for telling detail, McDonough tells the monstrous but well-known story in an attractive fresh way." —Andrew Roberts, historian and author of the New York Times Book Review Notable Book of the Year The Storm of War: A New History of the Second World War

"An intricate portrait of Adolf Hitler’s political rise and the Nazification of Germany...brisk and well-informed...an accessible introduction to the rise of the Third Reich."
—Publishers Weekly

"An expert [and] insightful chronological account. This one is worthy of study." —Kirkus Reviews