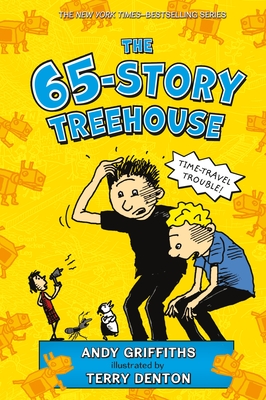 This is book number 5 in the The Treehouse Books series.

Before they can go up, they have to go back—travel through time with Andy and Terry as they attempt to save the treehouse!

New York Times bestselling author Andy Griffiths invites readers to come hang out with him and his friend Terry in their 65-Story Treehouse-the fifth book in the illustrated chapter book series filled with Andy and Terry's signature slapstick humor!

Andy and Terry live in a 65-Story Treehouse. (It used to be 52 stories, but they keep expanding.) It has a pet-grooming salon, a birthday room where it's always your birthday (even when it's not), a room full of exploding eyeballs, a lollipop shop, a quicksand pit, an ant farm, and a time machine...which is going to be really, really useful now, since Terry messed up (again) and the treehouse just FAILED it's safety inspection.

Join Andy and Terry on a whirlwind trip through time as they try to stop the treehouse from being demolished!

Andy Griffiths and the Treehouse series:

"Twice the treehouse, twice the fun? You bet. . . . Denton's furiously scrawled line drawings milk the silly, gross-out gags for everything they're worth. Kids should be flipping pages faster than a pair of inflatable underpants can skyrocket the young heroes to safety." —Publishers Weekly, starred review on The 26-Story Treehouse