A List of Things That Didn't Kill Me: A Memoir (Paperback) 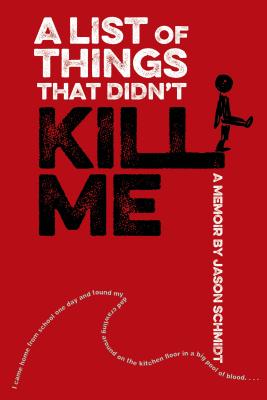 A List of Things That Didn't Kill Me by Jason Schmidt is a gripping, heartbreaking young adult memoir.

Jason Schmidt wasn't surprised when he came home one day during his junior year of high school and found his father, Mark, crawling around in a giant pool of blood. Things like that had been happening a lot since Mark had been diagnosed with HIV, three years earlier.

Jason's life with Mark was full of secrets—about drugs, crime, and sex. If the straights—people with normal lives—ever found out any of those secrets, the police would come. Jason's home would be torn apart. So the rule, since Jason had been in preschool, was never to tell the straights anything.

A List of Things That Didn't Kill Me is a funny, disturbing memoir full of brutal insights and unexpected wit that explores the question: How do you find your moral center in a world that doesn't seem to have one?

Jason Schmidt was born in Oregon in 1972. He has a law degree, and he lives with his family in Seattle, Washington.

“Schmidt's memoir is heartbreaking and touches the soul . . . Schmidt's brilliant prose will fascinate and appall teens and adults who read memoirs.” —VOYA

“A man whose emotionally unstable father moved him from home to home throughout the 1970s and '80s before dying of AIDS tells his story . . . Teens and adults who favor memoirs will be fascinated and deeply moved.” —Kirkus Reviews

“Schmidt’s memoir—which spans his childhood to late adolescence and chronicles his abuse and near homelessness at the hands of his drug-addicted gay father—is an emotionally demanding read.” —Publishers Weekly

“This title joins the ranks of harrowing true stories like Dave Pelzer's A Child Called It (1993) and Augusten Burrough's Running with Scissors (2002), compelling accounts of childhood despair that are painful to read and impossible to put down.” —Booklist