The Quiet Americans: Four CIA Spies at the Dawn of the Cold War (Paperback) 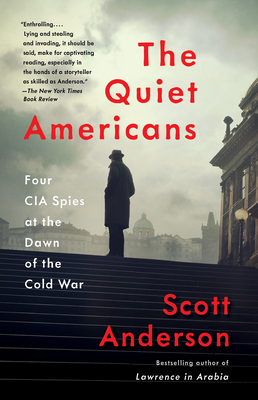 Anderson calls the history of the CIA’s early years “a tragedy in three acts,” and by the time I finished this incredibly well-crafted work, I could not have agreed more. Masterfully blending the stories of four men who were instrumental in the agency’s founding with an overarching narrative about the missed opportunities and failures of American foreign policy after the end of World War II, this tragedy is a must-read.

“Enthralling. . . . Lying and stealing and invading, it should be said, make for captivating reading, especially in the hands of a storyteller as skilled as Anderson.” —The New York Times Book Review

A NEW YORK TIMES NOTABLE BOOK OF THE YEAR

At the end of World War II, the United States was considered the victor over tyranny and a champion of freedom. But it was clear—to some—that the Soviet Union was already seeking to expand and foment revolution around the world, and the American government’s strategy in response relied on the secret efforts of a newly formed CIA. Chronicling the fascinating lives of the agents who sought to uphold American ideals abroad, Scott Anderson follows the exploits of four spies: Michael Burke, who organized parachute commandos from an Italian villa; Frank Wisner, an ingenious spymaster who directed actions around the world; Peter Sichel, a German Jew who outwitted the ruthless KGB in Berlin; and Edward Lansdale, a mastermind of psychological warfare in the Far East. But despite their lofty ambitions, time and again their efforts went awry, thwarted by a combination of ham-fisted politicking and ideological rigidity at the highest levels of the government. Told with narrative brio, deep research, and a skeptical eye, The Quiet Americans is the gripping story of how the United States, at the very pinnacle of its power, managed to permanently damage its moral standing in the world.

Scott Anderson is the author of two novels and four works of nonfiction, including Lawrence in Arabia, an international bestseller which was a finalist for the National Book Critics Circle Award and a New York Times Notable Book. A veteran war correspondent, he is a contributing writer for The New York Times Magazine.

“ENTHRALLING...Lying and stealing and invading, it should be said, make for captivating reading, especially in the hands of a storyteller as skilled as Anderson...the climate of fear and intolerance that it describes in Washington also feels uncomfortably timely. "
—Kevin Peraino, The New York Times Book Review

“Anderson’s look at four men who ran covert operations around the globe after World War II is AS THRILLING AS IT IS TRAGIC, as each man confronts the moral compromises he made in the name of democracy.”
—The Washington Post

“A DARKLY ENTERTAINING tale about American espionage, set in an era when Washington’s fear and skepticism about the agency resembles our climate today.“
—The New York Times

“In his skillful and fascinating “The Quiet Americans”…Mr. Anderson ingeniously tells his story through the entwined sagas of four of the secret service’s most adept and intrepid operatives”
—Edward Kosner, Wall Street Journal

“This intriguing book is an indictment. From its first page it argues that the CIA lost its way, in all senses, in the first decade of the cold war. Its witnesses are four courageous and initially idealistic patriots. Frank Wisner oversaw some of the earliest efforts to “roll back” communism in Europe. Michael Burke was a daredevil figure in the same game. Edward Lansdale was an éminence grise in the Far East. Peter Sichel, a German-born Jewish wine-merchant and Wunderkind—and the only one of the four still alive—held his nose as he co-opted former Nazis into the agency, an initiative cited as one of its original sins....Many of the CIA’s failures stemmed from familiar shortcomings. ‘We all have this tendency to look for information that confirms our beliefs and to ignore what conflicts with them,” explains Mr Sichel. “It’s very hard to give somebody information he doesn’t want to hear, and the more senior they are, the worse it is.’
— The Economist


"In this sweeping, vivid, beautifully observed book, Scott Anderson unearths the devastating secret history of how the Unites States lost the plot during the Cold War. By focusing on the twisty, colorful lives of four legendary spies, Anderson distills the larger geopolitical saga into an intimate story of flawed but talented men, of the 'disease of empires,' and of the inescapable moral hazard of American idealism and power. It's a hell of a book, with themes about the unintended consequences of espionage and interventionism that still resonate, powerfully, today."
—Patrick Radden Keefe, author of SAY NOTHING

“Anderson delivers a complex, massively scaled narrative, balancing prodigious research with riveting storytelling skills…Over the course of the narrative, the author amply shows how the CIA was increasingly pushed to function as an instrument of politically charged ambitions. An engrossing history of the early days of the CIA.”
—Kirkus Review (Starred)

"Anderson notes the harrowing emotional cost on his subjects…as the U.S. threw its support behind autocratic leaders and missed opportunities to aid legitimate liberation movements such as the 1956 Hungarian revolution. Such blunders, Anderson writes, recast the U.S. from WWII savior to “one more empire in the mold of all those that had come before.” Laced with vivid character sketches and vital insights into 20th-century geopolitics, this stand-out chronicle helps to make sense of the world today."
—Publisher’s Weekly (Starred)

"Anderson weaves his narrative among the lives of his subjects, highlighting aspects of their livelihoods as American spies that were at times equally frustrating, ridiculous, and chillingly dangerous…A fascinating and compulsively readable account of wartime spying."
— Library Journal