Searching for Stars on an Island in Maine (Hardcover) 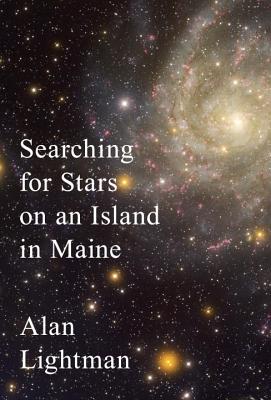 From the acclaimed author of Einstein's Dreams, here is an inspires, lyrical meditation on religion and science that explores the tension between our yearning for permanence and certainty, and the modern scientific discoveries that demonstrate the impermanent and uncertain nature of the world.

As a physicist, Alan Lightman has always held a scientific view of the world. As a teenager experimenting in his own laboratory, he was impressed by the logic and materiality of a universe governed by a small number of disembodied forces and laws that decree all things in the world are material and impermanent. But one summer evening, while looking at the stars from a small boat at sea, Lightman was overcome by the overwhelming sensation that he was merging with something larger than himself—a grand and eternal unity, a hint of something absolute and immaterial. Searching for Stars on an Island in Maine is Lightman's exploration of these seemingly contradictory impulses. He draws on sources ranging from Saint Augustine's conception of absolute truth to Einstein's theory of relativity, from the unity of the once-indivisible atom to the multiplicity of subatomic particles and the recent notion of multiple universes. What he gives us is a profound inquiry into the human desire for truth and meaning, and a journey along the different paths of religion and science that become part of that quest.

ALAN LIGHTMAN—who worked for many years as a theoretical physicist—is the author of six novels, including the international best seller Einstein's Dreams, as well as The Diagnosis, a finalist for the National Book Award. He is also the author of a memoir, three collections of essays, and several books on science. His work has appeared in The Atlantic, Granta, Harper's Magazine, The New Yorker, The New York Review of Books, Salon, and Nature, among other publications. He has taught at Harvard and at MIT, where he was the first person to receive a dual faculty appointment in science and the humanities. He is currently professor of the practice of the humanities at MIT. He lives in the Boston area.

“Science needs its poets, and Alan Lightman is the perfect amalgam of scientist and humanist and his latest book, “Searching for Stars on an Island in Maine,” is an elegant and moving paean to our spiritual quest for meaning in an age of science.”—Michael Shermer, The New York Times Book Review

"Lightman is to be admired for his willingness to take off his scientist’s hat and plunge into preoccupations most of his peers would strenuously avoid, some for fear of ridicule. Once again, this deft wordsmith has effortlessly straddled the divide between the hardest of the hard sciences and the nebulous world of existential doubts and longings.” —Anil Ananthaswamy, Nature

“A delightful collection of essays [that] examines Lightman’s own conflicted views on life, death and the nature of reality and tries to reconcile the primacy of his inner evidence-driven scientist with his longing for spiritual transcendence. His elegant and evocative prose draws in the reader, and I felt as if I were strolling alongside the author. Indeed, it was a challenge to keep pace as I repeatedly wandered off into reveries trigged by the narrative.” –Alan Hirshfeld, The Wall Street Journal

“A lyrical and illuminating inquiry into our dual impulse for belief in the unprovable and for trust in truth affirmed by physical evidence. Lightman traces our longing for absolutes in a relative world, from Galileo to Van Gogh, from Descartes to Dickinson, emerging with that rare miracle of insight at the meeting point of the lucid and luminous.” -Maria Popova, Brain Pickings

“Deceptively brilliant, Lightman’s prose is so simple and graceful that it can be easy to miss the quiet, deep sophistication of his approach to the fraught topic of science and religion. Read this and expect to be invited to think through the nature and implications of our seemingly unavoidable desire for Absolutes.” –Professor Edward J. Hall, Chair of the Department of Philosophy, Harvard University

“Thought-provoking….Lightman’s pursuit of certainty involves explorations of infinities, large and small; meditations on the problem of consciousness and humanity’s bio-tech future; field trips around Pole Island to look at hummingbirds and ants; and vivid glimpses of his heroes, among them Galileo, Einstein, St. Augustine, and his friend Yos Hut Khemacaro, a Cambodian Buddhist monk. As he has in previous books, Lightman gives us vast, complicated subjects in lucid, engaging prose.” —Laurie Greer, Politics & Prose

“This is a volume meant for savoring, for readerly ruminations, for thinking about and exploring one essay at a time. Lightman’s illuminating language and crisp imagery aim to ignite a sense of wonder in any reader who’s ever pondered the universe, our world, and the nature of human consciousness.” —Publishers Weekly, *starred review*

“One of our most reliable interpreters of science offers a slender book of ruminations that venture wide and deep. Theoretical physicist Lightman rarely ponders a scientific principle or development without considering its significance in human terms, an approach that is very much in the tradition of Lewis Thomas. Lightman focuses on the logical and mathematical underpinnings of the material world as it relates to concepts of "reality" and to spirituality broadly defined…. From Newton and Galileo to Einstein and Aristotle, from St. Augustine and the Buddha to contemporary theological thought, Lightman presents a distilled but comprehensive survey of the search for meaning, or the lack thereof, in our longing to be part of the infinite.” —Kirkus Reviews

“Physicist-novelist Lightman strives to, if not reconcile, at least put religion and science on good speaking terms. These personal and historical essays on religion, science, and religion-and-science are assembled to draw the reader ever deeper in…. An illuminating, deeply human book.” —Booklist

“Lightman’s logical mind is ever active and fluent, but so is his appreciation of the material world underfoot on his tiny snatch of island. Contemplative, elegant and open-minded, his latest book is an engaging companion to understanding our longing for connection with the infinite.” —Charleston Post and Courier

“[Lightman] weaves the writings of poets, scientists, and religious scholars as he explores the boundaries of the known (and unknown) world….Lightman’s artful and questioning narrative style easily conveys complex concepts from physics to philosophy. Recommended for serious but also curious nonfiction readers who enjoy the interplay of big ideas and theories. Both believers and nonbelievers will find much to ponder in this discussion of science and religion, which reads like a soothing meditation.” —Library Journal