Ancient Greece for Kids Through the Lives of its Philosophers, Lawmakers, and Heroes (Paperback) 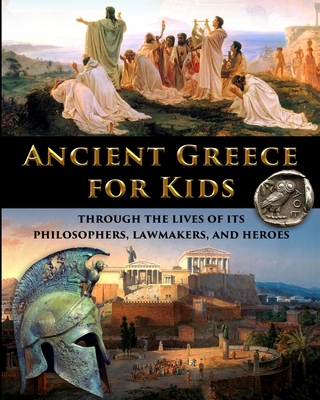 As a kid, I loved history. But whenever a history book started a boring dive into the economy, class structure, and archaeological finds of this or that era, I turned off my flashlight and went to sleep.

Kids like stories. Whether these are stories of heroism in scary wars, or of the wisdom and intrigue of ancient kings and rebels, or of the sudden turns of fate that befall fortune-seekers, kids are always fascinated by a story with a plot. They learn from stories, not from dense paragraphs about the phases of the Bronze age, the location of trade routes, or the injustices of the social order here and there.

I discovered that my kid remembers minute details of Greek mythology - which is a story-based narrative - and can't recall any cities of Ancient Greece, or any historical figures after reading non-fiction on the subject. To him, Ancient Greece is Odysseus and the Sirens. Because that's a memorable story, while the development of agricultural tools is not.

This book follows the old-fashioned, story-based, traditional route of teaching history - through the stories of heroes and kings, with no tribute paid to modern economic and social perspectives. If my kid remembers who Solon was because he recalls a couple funny anecdotes about him, I know he will put two and two together when he is studying the agricultural subsistence economy of that era down the road in Social Studies. But if he knows all about the injustices of slavery in Ancient Greece and doesn't know who Themistocles was, he will grow up lacking in cultural education. Culture is memes. And that means historical figures, and anecdotes about them.

The suggested reader age for this book is 8 to 14 years old. To write this book, I went back to Herodotus, Plutarch, Diogenes Laertius, and other ancient sources of biographical anecdotes, and extracted from them the stories that will be most memorable to a modern kid. I retold them without adding any fictional color. I have omitted some things, however. Anything gruesome or seriously cruel is not included. Anything off-color, or outside traditional-family-friendly morality is not included. I have included only accounts of the most major battles, and without much detail. Battles are important, but as a kid - maybe as a girl - I was falling asleep over the ancient battles. Politics: Again, I have included only major turns of events.

I wove the information about the social order and geography of Ancient Greece into the stories of the era's historical figures. So, no worries, the kid will learn about the Agora and Acropolis of Athens, the city-states of Corinth and Sparta, daily life in an Ancient Greek household, the major Greek temples, and the three orders of Ancient Greek architecture.

This book is richly illustrated. I don't agree that if you are 13 or 16 you should be content with pages and pages of text and no pictures. Illustrations help both kids and grownups to visualize - and therefore to remember - events and descriptions. I have illustrated the book mostly with paintings portraying historical figures or everyday life in classical Greece. Whenever I could, I chose late 19th century and early 20th century art over the older neoclassical paintings for a more accurate representation of the Ancient Greek costume and environment.

I added some photos of the sculpture, artifacts, and architectural monuments of Ancient Greece.

Important: I have selected illustrations with absolutely no nudity, so it's safe to take this book to school