Freedom, Culture, and the Right to Exclude: On the Permissibility and Necessity of Immigration Restrictions (Hardcover) 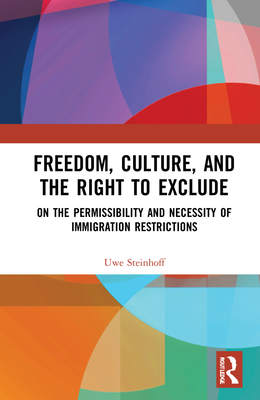 This book argues that citizens have a moral right to decide by which criteria they grant migrants citizenship, as well as to control access to their territory in the first place. In developing and defending this argument, it critically engages numerous objections, thus providing the reader with a thorough overview of the current debate on the ethics of immigration and exclusion.

The author's argument is based on a straightforwardly individualist and liberal starting point. One of the rights granted by liberalism is freedom of association, which also comprises the right not to associate with people with whom one does not want to associate. While this is an individual right, it can be exercised collectively like many other individual rights. Thus, people can decide to collectively organize into an association pursuing certain goals; and subject to certain provisos, this gives rise to legitimate claims to space and territory in which they pursue these goals. The author shows that this right is far-reaching and robust, which entails an equally far-reaching and robust right to exclude. Moreover, he demonstrates that large-scale immigration from illiberal cultures tends to severely compromise the way of life, the values, and the institutions of liberal democracies in ways routinely ignored by apologists for multiculturalism.

Freedom, Culture, and the Right to Exclude will be of interest to scholars and advanced students working in applied ethics, political philosophy, political theory, and law.