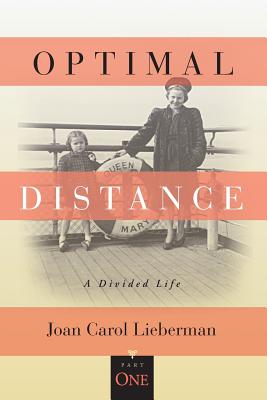 Part One of Joan Carol Lieberman's two-part autobiography, OPTIMAL DISTANCE, A Divided Life, reveals the genesis of her family in prose and photographs. The book's title comes from early recognition that her survival was dependent on maintaining a safe distance from her mother, the descendant of prominent Mormon pioneers, who tragically developed paranoid schizophrenia at the time of the author's birth. Perpetually alert to the distance between herself and others, her narrative draws upon the attachment theory of D.W. Winnicott, British pediatrician and psychoanalyst.
Her atheist father was a USDA research entomologist, who conducted the first experiments using DDT for agricultural purposes in Delta, Utah. After World War II, the author's family moved to Logan where she found safe harbor in the Mormon Church having followed a playmate to a Ward House, where her presence was welcomed. Knowing her mother would never follow her there, she felt the Mormon Church was a safe place to hide.
She was fourteen when her father was transferred to Bozeman, Montana and she left Mormonism behind. Less than a year later, her father was sent to Bakersfield, California, where the author finally read the medical literature on paranoid schizophrenia. In that era, experts believed schizophrenia was caused by "perverse mothering." She concluded that she was doomed, a fear that haunted her for the next twenty years. After studies in pre-med at the University of California at Berkeley, she traveled in Europe and worked as a medical volunteer in Africa. By the time she returned to Berkeley, the author had become an increasingly formidable and resilient woman, able to withstand the sadness of her mother's illness with the fortitude of a well-adjusted adult. Granted excommunication from the Mormon Church on the grounds of apostasy, she faced illegitimate pregnancy, a shotgun marriage, divorce, and single-working motherhood. She broke through the glass ceiling facing women in 1968 and kept going. Her poignant, painstakingly detailed journey is both exhaustive and intimately personal.
Locales include: Salt Lake City, Delta, and Logan, Utah; Yellowstone, Wyoming; Bozeman, Montana; Bakersfield and Berkeley, California; Europe; Ouagadougou, Burkina Faso; Troy, Idaho; and Boulder, Colorado.