Beat Atlas: A State by State Guide to the Beat Generation in America (Paperback) 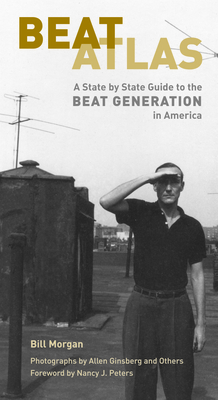 A companion to our guides to San Francisco and New York, Beat Atlas: A Guide to the Beat Generation in America is a state-by-state guide to the rest of the nation's significant Beat locales. From Jack Kerouac's Lowell to William Burroughs' Lawrence, Kansas, to Neal Cassady's Denver--and everywhere in between--Beat Atlas contains a wealth of historical information subdivided by region and state for easy reference and is illustrated with photographs by Allen Ginsberg. Written by Ginsberg biographer and Beat authority Bill Morgan, and rich with literary lore, Beat Atlas makes an ideal companion for armchair travelers as well as those on the road.

Bill Morgan (b.1949) is a painter and archival consultant who lives in New York City and Bennington, Vermont. He is the author of The Beat Generation in New York and The Beat Generation in San Francisco, I Celebrate Myself: The Somewhat Private Life of Allen Ginsberg, and edited Deliberate Prose: Selected Essays of Allen Ginsberg, 1952-1995, as well as Ginsberg's Book of Martyrdom and Artifice: First Journals and Poems, 1937-1952, and Howl on Trial: The Battle for Free Expression.Nancy Peters is the co-owner and past executive director of City Lights Books. She is the author of Literary San Francisco: A Pictorial History from its Origins to the Present Day (Harper, 1980). Allen Ginsberg (1926-1997), founding father of the Beat Generation, inspired the American counterculture of the second half of the twentieth century with his groundbreaking poems. His books include Howl & Other Poems, Kaddish & Other Poems, Reality Sandwiches, Planet News, Fall of American, Mind Breaths, and Plutonian Ode, all published by City Lights.