In the Presence of Buffalo: Working to Stop the Yellowstone Slaughter (Pruett) (Paperback) 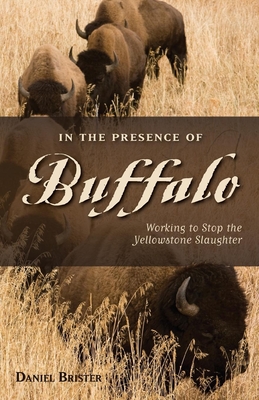 Very few of the 2.5 million people who visit Yellowstone National Park and who are awed by America's only continuously wild and genetically pure bison herd are aware that over the past decade, state and federal agencies have engaged in the wanton slaughter of 3,500 of these magnificent animals, solely because they wandered out of delineated confines of the National Park.
Author Daniel Brister has dedicated his life to protecting the buffalo through field work and at every level of the policy arena. In the Presence of Buffalo was inspired by his desire to see the buffalo honored and respected and the slaughter stopped. This inspiring narrative weaves personal reflections and stories of the present-day buffalo slaughter with information gathered through historical, cultural, and scientific research. Five chapters and an appendix explore the relationship between human beings and bison, or buffalo, as they are popularly called in this country.

The son of a Cape Cod fisherman, Daniel Brister traveled west the summer before his senior year at the University of Vermont. During that trip, he made his first backpacking trip into Yellowstone National Park, where he fell in love with the landscape and had his first contact with moose, elk, and bison. It was during that trip that Brister realized he was destined for a life aligned with nature and activism. Five years later, he moved to Missoula, Montana, where he read news reports of the slaughter of more than a thousand Yellowstone buffalo and after thoroughly researching the event, he became involved with the Buffalo Field Campaign, a nonprofit group dedicated to protecting the herd and ending the senseless slaughter.

Brister has been working to protect wild buffalo since 1997. He spent more than ten winters as a field volunteer with Buffalo Field Campaign before becoming the group's executive director. He is a firefighter and Emergency Medical Technician and has helped organize health care clinics in Honduras. He lives in western Montana with his wife, Andrea. This is his first book.

Foreword writer Doug Peacock is an American naturalist, outdoorsman, and author. He is best known for his book "Grizzly Years: In Search of the American Wilderness," a memoir of his experiences in the 1970s and 1980s, much of which was spent alone in the wilderness of the western United States observing grizzly bears.