You Gotta Get Bigger Dreams: My Life in Stories and Pictures (Hardcover) 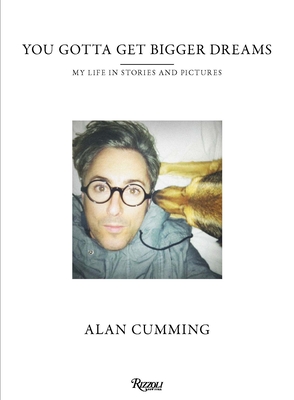 "There’s a lot of joy in this book and a lot of laughs. You Gotta Get Bigger Dreams is the best part of experiencing New York nightlife: all the gossip without the hangover."
—New York Journal of Books

“The pictures—and stories—are intimate, mischievous, funny, and poignant. It's a rare self-portrait by an actor in an era when most are wary of revealing too much.”
—Town & Country Magazine

"Cumming’s delight in life’s unexpectedly joyful experiences — of which he’s had plenty in his fortunate career — runs throughout the 45 essays in “You’ve Gotta Get Bigger Dreams,” his third book. . . . Cumming’s new book is rife with entertaining anecdotes, as well as personal reflections and at times shrewdly insightful commentary on his adopted country."
—SF Gate

"Cumming’s witty and incisive essays cover everything from a cross-country road trip with his beloved dog Honey to an unforgettable encounter with Oprah, whose one-line response to one of Cumming’s friends became the title of his book."
—Daily Front Row

"...a charming mosaic of anecdotes and photos..."
—Out Magazine

"Flipping through feels like passing a couple hours with the scrapbook of your most fabulous older cousin."
—Passport Magazine