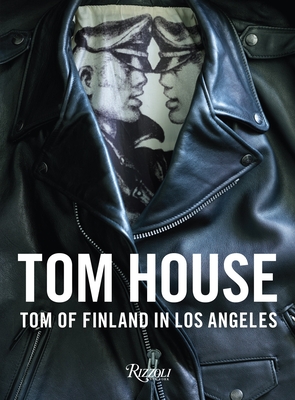 By Michael Reynolds (Editor), Mayer Rus (Contributions by), Martyn Thompson (Photographs by)
$55.00
NOT on our shelves - Usually Ships in 1-5 Days

An immersive glimpse into the private, domestic world of one of the twentieth century’s most revolutionary artists. Nestled in a leafy, residential section of Los Angeles is the house where Tom of Finland (Touko Laaksonen, 1920–1991) lived and worked during the last decade of his life. It is an extraordinary place—part shrine, part haven, part art-historical archive, and part utopian collective. Still occupied by the men who resided there with Tom and dedicated themselves to preserving his legacy, the house serves as a living tribute to the artist’s astonishing oeuvre and his radical vision of unapologetic homoerotic sexuality. Offered to the reader as an intimate view of the man behind the hypermasculine imagery, the book moves from art-filled room to art-filled room, dining room to dungeon. Almost every surface of the house is covered in work made by Tom himself, or by those he influenced and inspired. For additional insight, Martyn Thompson’s revelatory photographs are paired with rarely seen preparatory sketches and unfinished drawings. Together, the compelling images place Tom’s work in an entirely new light, inviting readers to explore a hidden world of dreams and desire—the world of Tom of Finland.

Michael Reynolds is a New York–based creative director, editorial stylist, exhibition and set designer, advertising director, curator, and visual brand consultant. He helped to create Wallpaper* Magazine, for which he currently serves as U.S. editor. He also is a contributing editor for Architectural Digest, among other publications.

Mayer Rus is the West Coast editor of Architectural Digest. He has contributed to The New York Times, Vogue, Artforum, W, and Wallpaper.

Photographer Martyn Thompson’s signature painterly images have made him a regular collaborator with the world’s leading brands and publications. His New York– based multidisciplinary studio produces fine textiles and decorative art based on his photographs.

"Tom of Finland’s artistic legacy is global. Yet – undeniably – his energy is the most present in his L.A. home, known affectionately as Tom House. . . Tom House: Tom of Finland in Los Angeles reveals the uninhibited mind of Tom to the masses, and gives us a peek into the house—now the site of the Tom of Finland Foundation–that doubles as a museum of his work."
-MUSEE MAGAZINE

"Tom House, as it's become known, was the erstwhile home and workplace of renegade Finnish artist Touko Laaksonen, perhaps the most influential homoerotic artist of the 20th century . . . Lavish interior photographs by Martyn Thompson provide an intimate glimpse into the rambling 17-room house and its surrounds. . . At Tom House, pleasure is always a moral imperative and life itself is a form of activism."
-WALLPAPER* MAGAZINE

"The book explores each room in the house, all crammed with works and artefacts that explore every dimension of Tuoko’s life, giving insight into what inspired him artistically, and, of course, carnally. Martyn’s images are packed with detail and depth, and are juxtaposed on page with previously unpublished preparatory drawings and sketches to give an idea of process. . . [Tom House] provides context for a body of work that never fails to provoke a response."
-ItsNiceThat.com

"Tom House: Tom of Finland in Los Angeles offers an intimate perspective into the extraordinary world of one of the most revolutionary artists of the 20th century. . . Throughout the sleekly-designed monograph, Thompson’s evocative images recreate the suggestive seductive atmosphere that fueled Tom of Finland’s art."
-Examiner.com

"Gay men across America will recognize Tom of Finland's iconic illustrations . . . But few know about the radical life of Touko Laaksonen, the man behind the brand. Tom House: Tom of Finland in Los Angeles provides a window into Laaksonen's world, taking readers on a full-color tour of the late artist's home, from 'dining-room to dungeon.'"
-SLATE MAGAZINE

"Tom House: Tom of Finland in Los Angeles is a fascinating collection of photographs showcasing the works of Touko Laaksonen (aka Tom of Finland) and the house in which a large portion of his work was created. . . Fans of Tom's work will appreciate the showcasing of his production process, the images that inspired him, and the world he inspired."
-EDGE MEDIA NETWORK