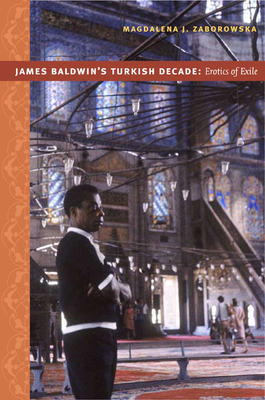 Between 1961 and 1971 James Baldwin spent extended periods of time in Turkey, where he worked on some of his most important books. In this first in-depth exploration of Baldwin's "Turkish decade," Magdalena J. Zaborowska reveals the significant role that Turkish locales, cultures, and friends played in Baldwin's life and thought. Turkey was a nurturing space for the author, who by 1961 had spent nearly ten years in France and Western Europe and failed to reestablish permanent residency in the United States. Zaborowska demonstrates how Baldwin's Turkish sojourns enabled him to re-imagine himself as a black queer writer and to revise his views of American identity and U.S. race relations as the 1960s drew to a close.

Following Baldwin's footsteps through Istanbul, Ankara, and Bodrum, Zaborowska presents many never published photographs, new information from Turkish archives, and original interviews with Turkish artists and intellectuals who knew Baldwin and collaborated with him on a play that he directed in 1969. She analyzes the effect of his experiences on his novel Another Country (1962) and on two volumes of his essays, The Fire Next Time (1963) and No Name in the Street (1972), and she explains how Baldwin's time in Turkey informed his ambivalent relationship to New York, his responses to the American South, and his decision to settle in southern France. James Baldwin's Turkish Decade expands the knowledge of Baldwin's role as a transnational African American intellectual, casts new light on his later works, and suggests ways of reassessing his earlier writing in relation to ideas of exile and migration.

Magdalena J. Zaborowska is Associate Professor in the Program in American Culture and the Center for Afroamerican and African Studies at the University of Michigan, Ann Arbor. She is the author of How We Found America: Reading Gender through East-European Immigrant Narratives; the editor of Other Americans, Other Americas: The Politics and Poetics of Multiculturalism; and a co-editor of Over the Wall/After the Fall: Post-Communist Cultures Through an East-West Gaze and The Puritan Origins of American Sex: Religion, Sexuality, and National Identity in American Literature.