So Famous and So Gay: The Fabulous Potency of Truman Capote and Gertrude Stein (Paperback) 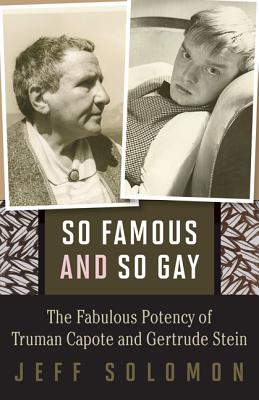 Gertrude Stein (1874–1946) and Truman Capote (1924–1984) should not have been famous. They made their names between the Oscar Wilde trial and Stonewall, when homosexuality meant criminality and perversion. And yet both Stein and Capote, openly and exclusively gay, built their outsize reputations on works that directly featured homosexuality and a queer aesthetic. How did these writers become mass-market celebrities while other gay public figures were closeted or censored? And what did their fame mean for queer writers and readers, and for the culture in general? Jeff Solomon explores these questions in So Famous and So Gay.

Celebrating lesbian partnership, The Autobiography of Alice B. Toklas was published in 1933 and rocketed Stein, the Jewish lesbian intellectual avant-garde American expatriate, to international stardom and a mass-market readership. Fifteen years later, when Capote published Other Voices, Other Rooms, a novel of explicit homosexual sex and love, his fame itself became famous. Through original archival research, Solomon traces the construction and impact of the writers’ public personae from a gay-affirmative perspective. He historically situates author photos, celebrity gossip, and other ephemera to explain how Stein and Capote expressed homosexuality and negotiated homophobia through the fleeting depiction of what could not be directly written—maneuvers that other gay writers such as Gore Vidal, Tennessee Williams, and James Baldwin could not manage at the time. Finally So Famous and So Gay reveals what Capote’s and Stein’s debuts, Other Voices, Other Rooms and Three Lives, held for queer readers in terms of gay identity and psychology—and for gay authors who wrote in their wake.

"Balancing biographical accounts with highly salient readings of a number of their works, So Famous and So Gay offers smart, surprising insights into the ways in which Truman Capote and Gertrude Stein achieved cultural prominence in spite of the homophobia that kept other openly gay writers of the period out of mainstream literary culture. A daring, suggestive, and intensely interesting book."—Lisa Ruddick, University of Chicago

"In So Famous and So Gay, Jeff Solomon amasses a treasure trove archive—literature, reviews, biographies, photographs, interviews—from which he examines the gayness, strangeness, and celebrity that combusted to create the queer precocity of Truman Capote and Gertrude Stein. At once critically expansive and insightful, this book is also a good story. Like Stein and Capote, Solomon is an engaging stylist in his own right. Read to learn, read to enjoy (imagine that!)."—Ken Corbett, author of A Murder Over a Girl

"Every bit as ‘fabulous’ as the subtitle promises, So Famous and So Gay focuses on two writers—Truman Capote and Gertrude Stein—whose strategies for politicizing questions of sexual identity included the manufacture of public personae as queerly flamboyant ‘geniuses’ and the exploitation of their author photos. Brilliantly exposing of the commodification of authorial identity, Solomon also offers a welcome corrective to strands of queer theory that neglect the specificities of same-sex desire."—Joseph Allen Boone, University of Southern California

"Jeff Solomon’s So Famous and So Gay effectively reinvigorates the single author genre by stretching its scope and preconceived boundaries. Solomon’s magisterial command of twentieth century American literary culture and his provocative use of author photos make this particular two-author study an engaging work of scholarship."—James Penner, author of Pinks, Pansies, and Punks: The Rhetoric of Masculinity in American Literary Culture

"A very ambitious and innovative work in the field of queer studies."—Leonardo

"Focusing on the nexus of sexuality, celebrity, and text, Solomon positions Capote and Stein as ‘comprehensive test cases’ for the interaction between homosexuality and US literature in the first half of the twentieth century." —American Literature