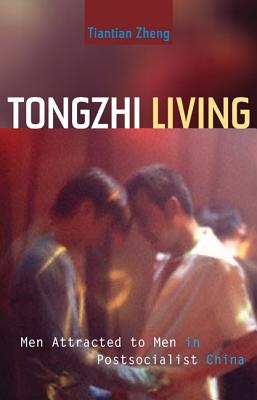 Tongzhi, which translates into English as “same purpose” or “same will,” was once widely used to mean “comrade.” Since the 1990s, the word has been appropriated by the LGBT community in China and now refers to a broad range of people who do not espouse heteronormativity.

Tongzhi Living, the first study of its kind, offers insights into the community of same-sex-attracted men in the metropolitan city of Dalian in northeast China. Based on ethnographic fieldwork by Tiantian Zheng, the book reveals an array of coping mechanisms developed by tongzhi men in response to rapid social, cultural, and political transformations in postsocialist China. According to Zheng, unlike gay men in the West over the past three decades, tongzhi men in China have adopted the prevailing moral ideal of heterosexuality and pursued membership in the dominant culture at the same time they have endeavored to establish a tongzhi culture. They are, therefore, caught in a constant tension of embracing and contesting normality as they try to create a new and legitimate space for themselves.

Tongzhi men’s attempts to practice both conformity and rebellion paradoxically undercut the goals they aspire to reach, Zheng shows, perpetuating social prejudice against them and thwarting the activism they believe they are advocating.

Tiantian Zheng is the author and co-author of eight books and professor of anthropology at the State University of New York, Cortland. Tiantian Zheng's book Red Lights (University of Minnesota Press, 2009) was the winner of the 2010 Sara A. Whaley Book Prize from the National Women’s Studies Association. Her book Ethnographies of Prostitution in Contemporary China was the winner of the 2011 Research Publication Book Award from the Association of Chinese Professors of Social Sciences in the United States.

"Tongzhi Living is ethnographically rich, beautifully written, and poignantly descriptive of many social spaces in urban China. Through the lens of tongzhi struggles, desires, and community organizing, we witness people working against marginalization, silence, and invisibility."—Ralph Litzinger, Duke University