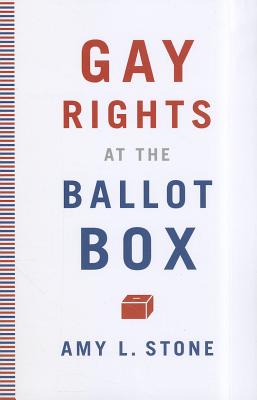 The passage of the anti-gay marriage Proposition 8 in California in 2008 stunned gay rights activists across the country. Although facing a well-funded campaign in support of the ballot measure, LGBT activists had good reasons for optimism, including the size and strength of their campaign. Since 1974, the LGBT movement has fought 146 anti-gay ballot initiatives sponsored by the religious right and has developed innovative strategies to oppose these measures. In Gay Rights at the Ballot Box, Amy L. Stone examines how the tactics of LGBT activists have evolved and unravels the complex relationship between ballot measure campaigns and the broader goals of the LGBT movement.

The first comprehensive history of anti-gay ballot measures, both those merely attempted and those successfully put before voters, this book draws on archival research and interviews with more than one hundred LGBT activists to provide a detailed account of the campaigns to stop such ballot measures from passing into law. As Stone shows through in-depth case studies, although LGBT activists lost the vast majority of these fights, they also won significant statewide victories in Oregon in 1992 and Arizona in 2006, and local successes, including ones in Ypsilanti, Michigan, in 1998 and 2002.

Stone analyzes how LGBT activists constantly refined their campaign tactics in response to both victories and defeats. She also stresses that such campaigns have played both a complementary and contradictory role within the LGBT movement. Specific anti-ballot campaigns and the broader movement do often strengthen each other. However, ballot measure campaigns sometimes distract activists from the movement’s more general goals, and activists at the movement level can pressure local campaigns to take on more than they can handle. With gay rights coming under increasing assault from the religious right, this book is a vital resource for LGBT activists and others working to block their efforts.

"Amy L. Stone crafts a compelling, deeply textured portrayal of the more than 200 anti-gay ballot campaigns in the U.S. since 1974. Through interviews with movement leaders and other sources, Stone deftly analyzes the tension between winning campaigns and building a sustainable movement, between national, urban activists and local, rural communities, as well as debates over tactics and messaging. Gay Rights at the Ballot Box is essential reading for anyone seeking to understand the central, disturbing role anti-gay politics has played in contemporary U.S. politics." —Sean Cahill, Ph.D., Fenway Institute and New York University