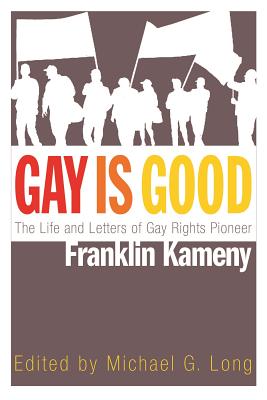 Contrary to popular notions, today's LGBT movement did not begin with the Stonewall riots in 1969. Long before Stonewall, there was Franklin Kameny (1925-2011), one of the most significant figures in the gay rights movement. Beginning in 1958, he encouraged gay people to embrace homosexuality as moral and healthy, publicly denounced the federal government for excluding homosexuals from federal employment, openly fought the military's ban against gay men and women, debated psychiatrists who depicted homosexuality as a mental disorder, identified test cases to advance civil liberties through the federal courts, acted as counsel to countless homosexuals suffering state-sanctioned discrimination, and organized marches for gay rights at the White House and other public institutions. In Gay Is Good, Long collects Kameny's historically rich letters, revealing some of the early stirrings of today's politically powerful LGBT movement.

These letters are lively and colorful because they are in Kameny's inimitable voice--a voice that was consistently loud, echoing through such places as the Oval Office, the Pentagon, and the British Parliament, and often shrill, piercing to the federal agency heads, military generals, and media personalities who received his countless letters. This volume collects approximately 150 letters from 1958 to 1975, a critical period in Kameny's life during which he evolved from a victim of the law to a vocal opponent of the law, to the voice of the law itself. Long situates these letters in context, giving historical and biographical data about the subjects and events involved. Gay Is Good pays tribute to an advocate whose tireless efforts created a massive shift in social attitudes and practices, leading the way toward equality for the LGBT community.

Michael G. Long is the author and editor of several books on politics, religion, and civil rights. He is the editor, most recently, of Beyond Home Plate: Jackie Robinson on Life after Baseball.