Manifest Destinies: The Making of the Mexican American Race (Paperback) 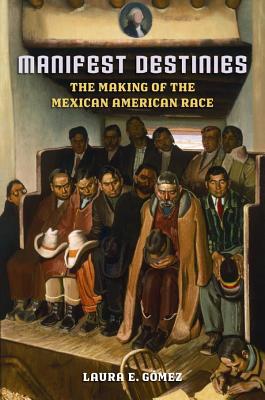 Watch the Author Interview on KNME

In both the historic record and the popular imagination, the story of nineteenth-century westward expansion in America has been characterized by notions of annexation rather than colonialism, of opening rather than conquering, and of settling unpopulated lands rather than displacing existing populations.

Using the territory that is now New Mexico as a case study, Manifest Destinies traces the origins of Mexican Americans as a racial group in the United States, paying particular attention to shifting meanings of race and law in the nineteenth century.

Laura E. G mez explores the central paradox of Mexican American racial status as entailing the law's designation of Mexican Americans as "white" and their simultaneous social position as non-white in American society. She tells a neglected story of conflict, conquest, cooperation, and competition among Mexicans, Indians, and Euro-Americans, the region's three main populations who were the key architects and victims of the laws that dictated what one's race was and how people would be treated by the law according to one's race.

G mez's path breaking work--spanning the disciplines of law, history, and sociology--reveals how the construction of Mexicans as an American racial group proved central to the larger process of restructuring the American racial order from the Mexican War (1846-48) to the early twentieth century. The emphasis on white-over-black relations during this period has obscured the significant role played by the doctrine of Manifest Destiny and the colonization of northern Mexico in the racial subordination of black Americans.

A native New Mexican, Laura E. Gomez is Professor of Law and American Studies at the University of New Mexico. She is the author of Misconceiving Mothers: Legislators, Prosecutors, and the Politics of Prenatal Drug Exposure.