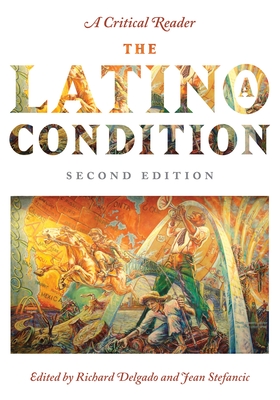 The second edition brings together new and classic Latino/a voices writing on questions of immigration, identity, history, law, and more

In the last forty-five years, immigration reform has brought tens of millions of new immigrants from Latin American countries to the United States. Since critical race theory pioneers Richard Delgado and Jean Stefancic compiled the first edition of The Latino/a Condition in 1998, the population has continued to grow exponentially, while scholarship on Latinos/as has grown just as quickly. The second edition of The Latino/a Condition brings together a wide range of new and classic Latino and Latina voices from the fields of law, sociology, history, media studies, and politics to address questions such as: *Who exactly is a Latino? Who is Hispanic? Who is Chicano?
*How did Spanish-speaking people come to live in the United States?
*Is the Latino family a source of strength or oppression? What about Catholicism?
*Should the United States try to control Latino immigration, and is this even possible?
*What are the most common media stereotypes of Latino people?
*Are Latinos white? What role does law play in the racial construction of the group? Collecting a wealth of perspectives on these and other issues central to the Latino/a experience, Delgado and Stefancic offer a broad portrait of Latino/a life in the United States at the beginning of the twenty-first century.

Richard Delgado is John J. Sparkman Chair of Law at the University of Alabama and one of the founders of critical race theory. His books include The Latino/a Condition: A Critical Reader (coedited with Jean Stefancic; NYU Press) and The Rodrigo Chronicles.