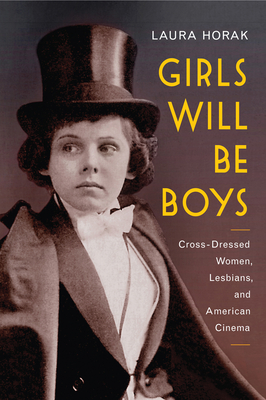 By Laura Horak
$41.08
If not in stock, we can Special Order from the publisher

Marlene Dietrich, Greta Garbo, and Katharine Hepburn all made lasting impressions with the cinematic cross-dressing they performed onscreen. What few modern viewers realize, however, is that these seemingly daring performances of the 1930s actually came at the tail end of a long wave of gender-bending films that included more than 400 movies featuring women dressed as men.

Laura Horak spent a decade scouring film archives worldwide, looking at American films made between 1908 and 1934, and what she discovered could revolutionize our understanding of gender roles in the early twentieth century. Questioning the assumption that cross-dressing women were automatically viewed as transgressive, she finds that these figures were popularly regarded as wholesome and regularly appeared onscreen in the 1910s, thus lending greater respectability to the fledgling film industry. Horak also explores how and why this perception of cross-dressed women began to change in the 1920s and early 1930s, examining how cinema played a pivotal part in the representation of lesbian identity.

Girls Will Be Boys excavates a rich history of gender-bending film roles, enabling readers to appreciate the wide array of masculinities that these actresses performed—from sentimental boyhood to rugged virility to gentlemanly refinement. Taking us on a guided tour through a treasure-trove of vintage images, Girls Will Be Boys helps us view the histories of gender, sexuality, and film through fresh eyes.

LAURA HORAK is an assistant professor of film studies at Carleton University, Ottawa, Canada. She is also the coeditor of an award-winning book, Silent Cinema and the Politics of Space.

"Horak has produced a meticulously researched, astutely argued, and highly readable text … her use of archival materials is impeccable and her filmic and historical analyses clearly display a nuanced understanding of her topic."
— Publishers Weekly

"This fascinating and well-written treatise is a laudable addition to film scholarship and a must-purchase for academic collections with concentrations in film or women's and gender studies."
— Library Journal

"Drawing on the early archives of American cinema, Horak questions the assumption that cross-dressing actresses were inherently transgressive ... and provides a new lens through which to view gender, sexuality and film."
— Autostraddle

"Fascinating and timely ... As the lesbian subject is being normalised in Hollywood and far beyond, this study of cross-dressing’s early filmic transition from heterosexual ideal to queer deviance is particularly valuable."
— Times Higher Education

"Horak's exhaustive research turns up many incredible moments in the history of gender shake-ups in the movies. Girls Will Be Boys is a hugely satisfying read, one of those rare books that offer distinct value to scholars while siultaneously being an entertaining read."
— The Gay & Lesbian Review Worldwide

"Girls Will Be Boys is a good read. It is thoroughly researched, well argued, insightful and readable. Anyone interested in LGBT history, film studies, or the early 20th century will appreciate this recommended book."
— Huffington Post

"Laura Horak's first monograph, Girls Will Be Boys: Cross-Dressed Women, Lesbians, and American Cinema, 1908-1934, is refreshing and invigorating. In a moment when pop culture is ablaze with stories of the 'novelty' of transgender and gender nonconforming people, this historian was delighted to sink into a thoroughly researched book that was ten years in the making."
— Film Quarterly

"One rarely comes across works that can recalibrate an entire field the way Horak’s does.  This amazing book reconfigures cinematic depictions of cross-dressing and lesbianism … Meticulously researched and accessible, Girls Will Be Boys is a must read for anyone working in GLBT film, gender studies, or early American cinema.  Few scholarly arguments as sophisticated as Horak’s are presented in such clear and precise language … Summing Up: Essential. Lower-division undergraduates through faculty; general readers."
— Choice

"Girls Will Be Boys expands and complicates the existing studies of androgyny, female masculinity, lesbian representation, and proto-queer identity in the early decades of U.S. film ... The reader may leave the book feeling grateful for Horak’s interpretive and anthropological labors, melancholy for how few of the films have survived on celluloid prints, and eager to pass Horak’s work to anyone—a new student or a senior scholar—who will be likewise surprised and challenged by its findings."
— Women's Studies

"Meticulously researched and engagingly-written … Horak's work is solidly interdisciplinary and combines contemporary feminist, queer, gender, and critical-race theory with thorough historical research; she uses media texts as a way to tell a larger story about American culture and succeeds brilliantly."
— The Journal of American History

"A thorough and thoughtful look at early cinema's phenomenon of films featuring female boys, mannish women, and cross-dressing girls ... [Horak's] approach changes what we thought we could assume about the history of sexuality and asks us to question how we made such assumptions."
— Feminist Media Studies

"Girls Will Be Boys is an excellent work of film scholarship, meticulously researched and expertly presented, while still being an approachable and enjoyable read for the diligent non-academic reader. This is a wonderful book for those cinephiles who take an interest in how gender and sexuality have been presented throughout film history, and for social historians who recognize the important role cinema has played over the last century in shaping popular perspectives on gender and sexuality. Laura Horak has written an informative and necessary book."
— Fourth & Sycamore

"Who knew how important were those girls who would be boys? Not only as signs of 'deviancy' but as ideals of red-blooded boyhood itself? This engaging, well-researched book tells more than we ever knew about the many and various reasons 'girls will be boys.'"
— Linda Williams

"Laura Horak's Girls Will Be Boys is without peer as a historical contribution to queer scholarship on early film. It is a revisionist work that draws upon a wealth of historical research to completely overturn previous accounts."
— Robert J. King

"With this fascinatingly detailed and thorough study of cross-dressed women in pre-code cinema, Horak puts the light on a seldom studied practice."
— French Journal of Media Studies

"By repositioning our perspective within the lens of the films’ initial reception, Horak provides a much-needed new view of what cross-dressing women and lesbians meant within the context of early film."
— The Velvet Light Trap

"An edifying study at the crossroads of film history and gender studies, Laura Horak’s Girls Will Be Boys will, one hopes, inspire students and scholars to explore the forgotten films, novels, and plays that Horak recovers and to re-examine the familiar examples on which she sheds new light."
— Film and History