Law and the Gay Rights Story: The Long Search for Equal Justice in a Divided Democracy (Hardcover) 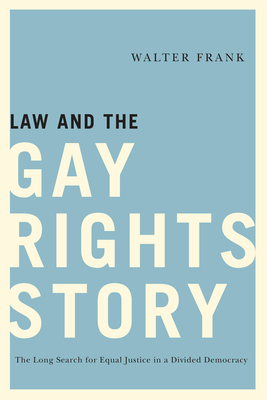 For much of the 20th century, American gays and lesbians lived in fear that public exposure of their sexualities might cause them to be fired, blackmailed, or even arrested. Today, they are enjoying an unprecedented number of legal rights and protections. Clearly, the tides have shifted for gays and lesbians, but what caused this enormous sea change?

In his gripping new book, Walter Frank offers an in-depth look at the court cases that were pivotal in establishing gay rights. But he also tells the story of those individuals who were willing to make waves by fighting for those rights, taking enormous personal risks at a time when the tide of public opinion was against them. Frank’s accessible style brings complex legal issues down to earth but, as a former litigator, never loses sight of the law’s human dimension and the context of the events occurring outside the courtroom.

Chronicling the past half-century of gay and lesbian history, Law and the Gay Rights Story offers a unique perspective on familiar events like the Stonewall Riots, the AIDS crisis, and the repeal of “Don’t Ask, Don’t Tell.” Frank pays special attention to the constitutional issues surrounding same-sex marriage and closely analyzes the two recent Supreme Court cases addressing the issue. While a strong advocate for gay rights, Frank also examines critiques of the movement, including some coming from the gay community itself. Comprehensive in coverage, the book explains the legal and constitutional issues involved in each of the major goals of the gay rights movement: a safe and healthy school environment, workplace equality, an end to anti-gay violence, relationship recognition, and full integration into all the institutions of the larger society, including marriage and military service.  Drawing from extensive archival research and from decades of experience as a practicing litigator, Frank not only provides a vivid history, but also shows where the battle for gay rights might go from here.

WALTER FRANK, formerchief of commercial litigation for the Port Authority of New York and New Jersey, is also the author of Making Sense of the Constitution (2012). He has authored several law review articles dealing with constitutional aspects of the electoral process. Mr. Frank currently serves as co-chairperson of the Law and Literature Committee of the New York County Lawyers Association.

"[The] long history of lesbian and gay legal battles [is] well summarized in Law and the Gay Rights Story, a book that deals with many issues other than the right to marry: the workplace, freedom to serve in the armed forces, freedom from violence, freedom for open gays to teach in public schools."
— Edmund White

"The balance of deep treatment of legal issues, vivid event coverage, honest critiques of the movement, and particular attention to the individuals who faced enormous risks fighting for gay rights makes this book an engaging and meaningful read."
— Harvard Law Review

"Legal expert Frank offers a timely look at the history and achievements of the Gay Rights movement. Frank outlines the strategy the movement employed—win the hearts and minds of citizens, persuade lawmakers, and finally vindicate rights in the courtroom—and then follows that strategy as it unfolds, providing valuable context to the sea change that has put the movement's goals within reach. Frank's enlightening book underscores how long and difficult the road has been for gay rights and how much has been gained."
— Publishers Weekly

"Frank skillfully weaves together just enough of the concepts and nuances of the law with lively tales of gays and lesbians emerging from the shadows to make for an engrossing story of how activists asserted their rights in the streets, in the courts, and in legislative lobbies."
— Gay and Lesbian Review

"The book's signal achievement is its accessible and compelling prose. Frank translates legalese into English, and he tells vivid stories that drive home the human cost of antigay discrimination. Moreover, he packs a lot of law, history, and politics into a small package, making his book an excellent primer for undergraduates and laypeople interested in either the gay rights movement or the study of law and society."
— Political Science Quarterly

"Walter Frank does an extraordinary job compressing over forty years of political, social and legal history into concise, elegant, highly readable prose. I thought I already knew this material inside out but I learned an enormous amount reading his book."
— Christopher Bram

"This is a great and timely book about a still-evolving highly controversial issue. Frank's perceptive analysis, fluent writing, and engaging voice make Law and the Gay Rights Story irresistible and endlessly instructive."

"Walter Frank discusses the role of law in advancing the gay rights movement, at the same time providing a broad overview of the legal, political, and cultural changes involving gay people over the last fifty years. While covering virtually every important gay rights legal case, Frank also interweaves compelling human stories about the challenges and joys of being gay in America."
— Carlos Ball