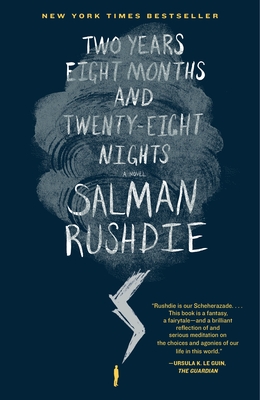 By Salman Rushdie
$17.00
On Our Shelves Now. Click on the title to see details.

From Salman Rushdie, one of the great writers of our time, comes a spellbinding work of fiction that blends history, mythology, and a timeless love story. A lush, richly layered novel in which our world has been plunged into an age of unreason, Two Years Eight Months and Twenty-Eight Nights is a breathtaking achievement and an enduring testament to the power of storytelling.

In the near future, after a storm strikes New York City, the strangenesses begin. A down-to-earth gardener finds that his feet no longer touch the ground. A graphic novelist awakens in his bedroom to a mysterious entity that resembles his own sub–Stan Lee creation. Abandoned at the mayor’s office, a baby identifies corruption with her mere presence, marking the guilty with blemishes and boils. A seductive gold digger is soon tapped to combat forces beyond imagining.

Unbeknownst to them, they are all descended from the whimsical, capricious, wanton creatures known as the jinn, who live in a world separated from ours by a veil. Centuries ago, Dunia, a princess of the jinn, fell in love with a mortal man of reason. Together they produced an astonishing number of children, unaware of their fantastical powers, who spread across generations in the human world.

Once the line between worlds is breached on a grand scale, Dunia’s children and others will play a role in an epic war between light and dark spanning a thousand and one nights—or two years, eight months, and twenty-eight nights. It is a time of enormous upheaval, in which beliefs are challenged, words act like poison, silence is a disease, and a noise may contain a hidden curse.

Inspired by the traditional “wonder tales” of the East, Salman Rushdie’s novel is a masterpiece about the age-old conflicts that remain in today’s world. Two Years Eight Months and Twenty-Eight Nights is satirical and bawdy, full of cunning and folly, rivalries and betrayals, kismet and karma, rapture and redemption.

“Rushdie is our Scheherazade. . . . This book is a fantasy, a fairytale—and a brilliant reflection of and serious meditation on the choices and agonies of our life in this world.”—Ursula K. Le Guin, The Guardian

“One of the major literary voices of our time . . . In reading this new book, one cannot escape the feeling that [Rushdie’s] years of writing and success have perhaps been preparation for this moment, for the creation of this tremendously inventive and timely novel.”—San Francisco Chronicle

“A wicked bit of satire . . . [Rushdie] riffs and expands on the tales of Scheherazade, another storyteller whose spinning of yarns was a matter of life and death.”—USA Today

“A swirling tale of genies and geniuses [that] translates the bloody upheavals of our last few decades into the comic-book antics of warring jinn wielding bolts of fire, mystical transmutations and rhyming battle spells.”—The Washington Post

“Great fun . . . The novel shines brightest in the panache of its unfolding, the electric grace and nimble eloquence and extraordinary range and layering of his voice.”—The Boston Globe

Salman Rushdie is the author of eleven previous novels—Grimus, Midnight’s Children (for which he won the Booker Prize and the Best of the Booker), Shame, The Satanic Verses, Haroun and the Sea of Stories, The Moor’s Last Sigh, The Ground Beneath Her Feet, Fury, Shalimar the Clown, The Enchantress of Florence, and Luka and the Fire of Life—and one collection of short stories: East, West. He has also published four works of nonfiction—Joseph Anton, The Jaguar Smile, Imaginary Homelands, and Step Across This Line—and co-edited two anthologies, Mirrorwork and Best American Short Stories 2008. He is a member of the American Academy of Arts and Letters and a Distinguished Writer in Residence at New York University. A former president of PEN American Center, Rushdie was knighted in 2007 for services to literature.

“[Salman] Rushdie is our Scheherazade, inexhaustibly enfolding story within story and unfolding tale after tale with such irrepressible delight that it comes as a shock to remember that, like her, he has lived the life of a storyteller in immediate peril. . . . This book is a fantasy, a fairytale—and a brilliant reflection of and serious meditation on the choices and agonies of our life in this world. . . . I like to think how many readers are going to admire the courage of this book, revel in its fierce colors, its boisterousness, humor and tremendous pizzazz, and take delight in its generosity of spirit.”—Ursula K. Le Guin, The Guardian

“Incandescent . . . brilliant, ambitious . . . Before the arrival of his latest novel, Two Years Eight Months and Twenty-Eight Nights, Rushdie’s stature as one of the major literary voices of our time was already secure. And yet, in reading this new book, one cannot escape the feeling that all those years of writing and success have perhaps been preparation for this moment, for the creation of this tremendously inventive and timely novel.”—San Francisco Chronicle

“A wicked bit of satire . . . [Rushdie] riffs and expands on the tales of Scheherazade, another storyteller whose spinning of yarns was a matter of life and death.”—USA Today

“In these nested, swirling tales, Rushdie conjures up a whole universe of jinn slithering across time and space, meddling in human affairs and copulating like they’ve just been released from twenty years in a lamp. . . . Two Years Eight Months and Twenty-Eight Nights translates the bloody upheavals of our last few decades into the comic-book antics of warring jinn wielding bolts of fire, mystical transmutations and rhyming battle spells.”—The Washington Post

“Great fun . . . The novel shines brightest in the panache of its unfolding, the electric grace and nimble eloquence and extraordinary range and layering of his voice.”—The Boston Globe

“This is Rushdie’s first [novel] for adults since 2008, and he seems to be having fun with the adult content. He works in jokes about the sexual appetites of his jinn, brings alive dark corners of Manhattan, explores misplaced love, and creates a good-versus-evil battle that’s firmly grounded in philosophy. . . . Two Years Eight Months and Twenty-Eight Nights is erudite without flaunting it, an amusement park of a pulpy disaster novel that resists flying out of control by being grounded by religion, history, culture and love.”—Los Angeles Times

“[A] rambunctious, satirical, and bewitching metaphysical fable, perhaps his most thoroughly enjoyable to date. At once a scholar, rigorous observer, and lavishly imaginative novelist, Rushdie channels his well-informed despair over the brutality and absurdity of human life into works of fantasy. . . . Rushdie is having wickedly wise fun here. Every character has a keenly hilarious backstory, and the action (flying carpets and urns, gigantic attacking serpents, lightning strikes, to-the-death combat, sex) surges from drastic and pulse-raising to exuberantly madcap, magical, and genuinely emotional. . . . [A] fantastically inventive, spirited, astute, and delectable update of One Thousand and One Nights.”—Booklist (starred review)

“A boisterous novel of ideas, a spirited manifesto for reason disguised as a tale of a jinn war lasting exactly two years, eight months and twenty-eight nights, or 1,001 nights . . . What results is hallmark Rushdie: a composite of magic realism, mythology, science fiction and straight-up fantasy. . . . Like the best Rushdie novels, Two Years is playful and inventive, and also intellectually bracing.”—The Globe and Mail

“One of his very best books, one whose governing metaphor can be about many terrible truths indeed . . . a sometimes archly elegant, sometimes slightly goofy fairy tale—with a character named Bento V. Elfenbein, how could it be entirely serious?—for grown-ups . . . Beguiling and astonishing, wonderful and wondrous. Rushdie at his best.”—Kirkus Reviews (starred review)

“A comic novel about Medieval Islamic philosophy, fairies and the near end of the world may sound difficult. Rushdie’s brilliance is in the balance between high art and pop culture. . . . This is a novel of both intellectual heft and sheer reading pleasure—a rare feat.”—St. Louis Post-Dispatch

“There are monsters who slip through wormholes, or slits between worlds; there are battles and set pieces, in Fairyland and on Earth; there are sometimes ridiculous, sometimes hilarious comic turns; stories within stories; riddles within tales within legends. And there is Salman Rushdie, manic Scheherazade, assuming all the voices, playing all the parts, making a mad kind of sense of it all.”—Minneapolis Star Tribune

“The title adds up to 1,001 nights, an allusion to the story of Scheherazade, and although there are not 1,001 strands of story here, there are many, and they are colourful and compelling. . . . Rushdie displays the wry humour that helped make Midnight’s Children such a masterpiece.”—The Independent

“Two Years Eight Months and Twenty-Eight Nights is replete with fantastical creatures, scary monsters, very bad men (or rather, male jinns/genies) and one heroic woman. . . . While Rushdie has written hyped up sagas of worlds colliding before, and always espouses reason over fanaticism, there is something so loopy, so unleashed, about this tale as to make it particularly thrilling.”—New York Daily News

“In his latest novel, Rushdie invents his own cultural narrative—one that blends elements of One Thousand and One Nights, Homeric epics, and sci-fi and action/adventure comic books. . . . Referencing Henry James, Mel Brooks, Mickey Mouse, Gracian, Bravo TV, and Aristotle, among others, Rushdie provides readers with an intellectual treasure chest cleverly disguised as a comic pop-culture apocalyptic caprice.”—Publishers Weekly (starred review)