The March: A Novel (Paperback) 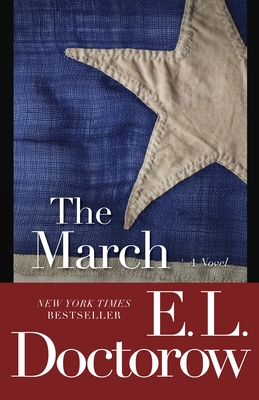 In 1864, Union general William Tecumseh Sherman marched his sixty thousand troops through Georgia to the sea, and then up into the Carolinas. The army fought off Confederate forces, demolished cities, and accumulated a borne-along population of freed blacks and white refugees until all that remained was the dangerous transient life of the dispossessed and the triumphant. In E. L. Doctorow’s hands the great march becomes a floating world, a nomadic consciousness, and an unforgettable reading experience with awesome relevance to our own times.

“E. L. Doctorow [is] always astonishing. . . . In The March, he dreams himself backward from The Book of Daniel to Ragtime to The Waterworks to the Civil War, into the creation myth of the Republic itself, as if to assume the prophetic role of such nineteenth-century writers as Emerson, Melville, Whitman, and Poe.”—Harper’s

“An Iliad-like portrait of war as a primeval human affliction . . . [welds] the personal and the mythic into a thrilling and poignant story.”—New York Times

“Splendid . . . carries us through a multitude of moments of wonder and pity, terror and comedy . . . with an elegiac compassion and prose of a glittering, swift-moving economy.” —The New Yorker

“Spellbinding . . . a ferocious re-imagining of the past that returns it to us as something powerful and strange.”—Time