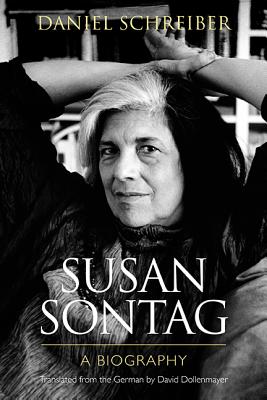 Susan Sontag (1933–2004) was one of America’s first celebrity intellectuals. In the first biography to be published since her death, Daniel Schreiber portrays a glamorous woman full of contradictions and inner conflicts, whose life mirrored the cultural upheavals of her time.

While known primarily as a cultural critic and novelist, Sontag was also a filmmaker, stage director, and dramatist. It was her status as a pop icon that was unusual for an American intellectual: she was filmed by Andy Warhol and Woody Allen, photographed by Annie Leibovitz and Diane Arbus, and her likeness adorned advertisements for Absolut vodka. Drawing on newly available sources, including interviews with Nadine Gordimer, Robert Wilson, and Sontag’s son, David Rieff, as well as on myriad interviews given by Sontag and her extensive correspondence with her friend and publisher Roger Straus, Schreiber explores the roles that Sontag played in influencing American public cultural and political conversations.

DANIEL SCHREIBER is a Berlin-based writer. An art and literary critic, he contributes to numerous German and Swiss magazines and newspapers, including Die Zeit, DU—das Kulturmagazin, Philosophie Magazin, Litera turen, and Weltkunst, as well as the radio station Deutschlandradio Kultur. He is a columnist for the daily taz—die tageszeitung, and his essays on art and culture appear in a number of anthologies. He was previously contributing editor to Monopol and headed the culture section of the magazine Cicero.

DAVID DOLLENMAYER is emeritus professor of German at Worcester Polytechnic Institute and is the winner of the 2008 Helen and Kurt Wolff Prize for his translation of Moses Rosenkranz’s Childhood: An Autobiographical Fragment.

"A sensitive, cleareyed biography of an intellectual star" -Kirkus Reviews

"To capture Sontag’s life and spirit by honoring her dimensionality, then, is a monumental task, but one which... Daniel Schreiber accomplishes with enormous elegance in the long-awaited Susan Sontag: A Biography" -Brain Pickings

"In succinct, easy-to-follow fashion, the biography helps account for why Sontag was a writer of many tastes and talents who continues to attract interest." -Columbus Dispatch