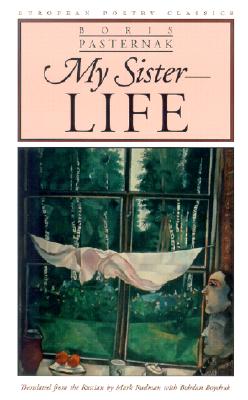 Boris Pasternak, the Nobel laureate and author of Doctor Zhivago, composed one of the world's great love poems in My Sister—Life. Written in the summer of 1917, the cycle of poems focuses on personal journeys and loves but is permeated by the tension and promise of the impending October Revolution.

Osip Mandelstam wrote: "To read the poems of Pasternak is to get one's throat clear, to fortify one's breathing. . . . I see Pasternak's My Sister—Life as a collection of magnificent exercises in breathing . . . a cure for tuberculosis." This English translation, rendered with verve and intelligence by Mark Rudman, is a heady gust that matches the intensity and power of the original Russian text.

Mark Rudman was born in New York City where he now lives with his wife and son. He is an Adjunct Professor at NYU. His books include Rider, which received the National Book Critics Circle Award in Poetry for 1994; Realm of Unknowing: Meditations on Art, Suicide, and Other Transformations, and The Couple (2001). Rudman also received the Max Hayward Award from the Translation Center at Columbia University for My Sister—Life.


Bohdan Boychuk is a prominent Ukrainian poet who critiqued and guided Rudman's version of Pasternak.