Sex and the Eighteenth-Century Man: Massachusetts and the History of Sexuality in America (Paperback) 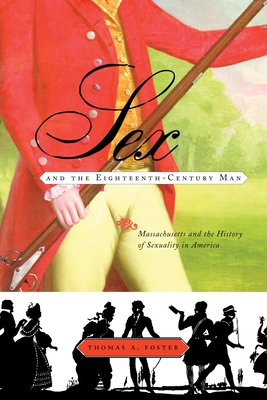 With few exceptions, sex is noticeably absent from popular histories chronicling colonial and Revolutionary America. Moreover, it is rarely associated specifically with early American men. This is in part because sex and family have traditionally been associated with women, while politics and business are the historic province of men. But Thomas Foster turns this conventional view on its head. Through the use of court records, newspapers, sermons, and private papers from Massachusetts, he vividly shows that sex—the behaviors, desires, and identities associated with eroticism —was a critical component of colonial understanding of the qualities considered befitting for a man.

Sex and the Eighteenth-Century Man begins by examining how men, as heads of households, held ultimate responsibility for sex—not only within their own marriages but also for the sexual behaviors of dependents and members of their households. Foster then examines the ways sex solidified bonds in the community, including commercial ties among men, and how sex operated in courtship and social relations with women. Starkly challenging current views about the development of sexuality in America, the book details early understandings of sexual identity and locates a surprising number of stereotypes until now believed to have originated a century later, among them the black rapist and the unmanly sodomite, figures that serve to reinforce cultural norms of white male heterosexuality.

As this engrossing and surprising study shows, we cannot understand manliness today or in our early American past without coming to terms with the oft-hidden relationship between sex and masculinity.

This is an innovative contribution to our growing knowledge of sexual identities in eighteenth-century America. Foster frames a discussion of same-sex sexuality in the context of a rich body of evidence for such 'nascent sexual types' as the effeminate fop, the bachelor and the sodomite. The gems he has found in Massachusetts newspapers and court testimony make this an absorbing, well-argued work.—Alfred Young, author of Masquerade: The Life and Times of Deborah Sampson, Continental Soldier

"In this thoroughly researched and well-crafted book, Tom Foster shows convincingly that American notions of sexuality and manliness have long been linked in complex ways. He has uncovered a history that we need to know—a history that exposes the roots of many contemporary attitudes toward masculinity."—Mary Beth Norton, author of Founding Mothers & Fathers: Gendered Power and the Forming of American Society

"Tom Foster has given us a bold new interpretation of the importance of male sexuality to Puritan society. Sex, he reveals, was at the center of eighteenth-century understandings of ideal and deviant manhood—presenting a world where ideal manhood was constructed against nascent sexual types of the sexually suspect bachelor, the dangerous black rapist, and the effeminate sodomite—and demonstrating that 'inner states of desire' contributed to the identities early American men fashioned for themselves. Skillfully researched and gracefully written, Sex and the Eighteenth- Century Man makes an important contribution to the history of sexuality and the historical study of manhood in America."—Clare A. Lyons, author of Sex among the Rabble: An Intimate History of Gender and Power in the Age of Revolution

"Saucy . . . Foster argues that our view of colonial America is much too chaste. You might not know it from reading those blockbusting biographies of the founding fathers, but sex was everywhere." —Matthew Price, New York Times Book Review

"For both what it shows and what it suggests, Sex and the Eighteenth-Century Man casts its eye on a fascinating and pivotal place and time. It's a book sure to add a new dimension to readers' understanding of masculinity's myriad forms." —Michael Bronski, The Guide

"An important work that deserves a home in every academic institution in this country . . . a fascinating and engaging read for any fan of American culture or the history of sexuality."—Michael G. Cornelius, Bloomsbury Review