Manifest Injustice: The True Story of a Convicted Murderer and the Lawyers Who Fought for His Freedom (Hardcover) 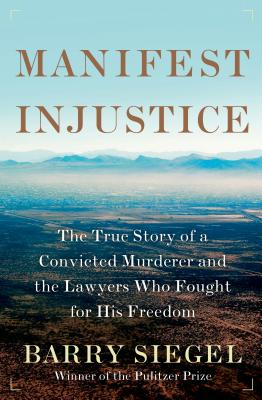 In this remarkable legal page-turner, Pulitzer Prize winning journalist Barry Siegel recounts the dramatic, decades-long saga of Bill Macumber, imprisoned for thirty-eight years for a double homicide he denies committing. In the spring of 1962, a school bus full of students stumbled across a mysterious crime scene on an isolated stretch of Arizona desert: an abandoned car and two bodies. This brutal murder of a young couple bewildered the sheriff 's department of Maricopa County for years. Despite a few promising leads including several chilling confessions from Ernest Valenzuela, a violent repeat offender the case went cold. More than a decade later, a clerk in the sheriff 's department, Carol Macumber, came forward to tell police that her estranged husband had confessed to the murders. Though the evidence linking Bill Macumber to the incident was questionable, he was arrested and charged with the crime. During his trial, the judge refused to allow the confession of now-deceased Ernest Valenzuela to be admitted as evidence in part because of the attorney-client privilege. Bill Macumber was found guilty and sentenced to life in prison.

The case, rife with extraordinary irregularities, attracted the sustained involvement of the Arizona Justice Project, one of the first and most respected of the non-profit groups that represent victims of manifest injustice across the country. With more twists and turns than a Hollywood movie, Macumber's story illuminates startling, upsetting truths about our justice system, which kept a possibly innocent man locked up for almost forty years, and introduces readers to the generations of dedicated lawyers who never stopped working on his behalf, lawyers who ultimately achieved stunning results. With precise journalistic detail, intimate access and masterly storytelling, Barry Siegel will change your understanding of American jurisprudence, police procedure, and what constitutes justice in our country today.

Barry Siegel is a Pulitzer Prize winning former national correspondent for the Los Angeles Times and he directs the literary journalism program at UC Irvine where he is a professor of English. He is the author of six books, including Shades of Gray and Claim of Privilege. He lives in Los Angeles with his wife and daughter.

"Fascinating. . . Siegel [is] a talented author." —Minneapolis Star Tribune "Mr. Siegel brilliantly creates for the reader the essence of a jury trial: two sides, two narratives, two bodies of evidence and two theories of interpretation. Manifest Injustice stays with the reader long after the last page for it is not just a story of one man, but a fascinating indictment of our judicial system as a whole." —New York Journal of Books

"For fans of John Grisham, Harlan Coben and Michael Connelly and for true crime fans. Bill Macumber was imprisoned for nearly 40 years for a crime he denied committing. In a fast-paced, suspenseful style which enhances the intriguing facts of this true story, journalist Barry Siegel recounts Macumber’s long and twisted road to justice." —The Sun Star Courier

"Manifest Injustice is a piece of masterful storytelling. Readers won’t soon forget this harrowing tale of crime and punishment in America today, or the man imprisoned for 38 years for a crime he vehemently denies committing." —Gay Talese

"Reminiscent of Errol Morris’s compelling investigation into the dubious proceedings of the Jeffrey MacDonald case in A Wilderness of Error, Siegel’s detailed rendering of the decades of efforts on Macumber’s behalf makes the horror of his situation resonate." —Publishers Weekly (starred review)

"Siegel creates a gripping narrative nonfiction treatment of what led to Macumber, a man with no connection to the murders, being convicted a decade after the killings, long after a confession by a repeat offender . . . On November 7, 2012, Macumber, now 77, was suddenly released from prison, which adds to the force of Siegel’s arguments and the outrage his advocacy journalism inspires about wrongful convictions and the fissures in the justice system." —Booklist (starred review)

"This book is a must-read for students of crime and criminology. It should also appeal to general readers who follow sensational murder cases."—Library Journal (starred review)

"A fascinating, convoluted murder mystery demonstrating that the law should never be confused with common sense." —Kirkus Reviews