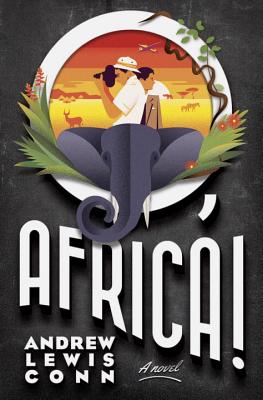 A rollicking and ambitious novel that recalls Michael Chabon's "The Amazing Adventures of Kavalier and Clay" and E. L. Doctorow's "Ragtime," "O, Africa " follows two filmmakers on an unlikely journey, while exploring the complexities of race, class, sexuality, and success in early twentieth century America.
In the summer of 1928, twin brothers Micah and Izzy Grand are at the pinnacle of their movie-making careers. From their roots as sons of Brooklyn immigrants, they have risen to become kings of silent comedy with the brash, bloviating Micah directing and calling the shots, while his retreating brother skillfully works behind the lens. But when Micah's penchant for gambling, and his interracial affair with Rose, a sharp-witted, light-skinned black woman from Harlem, combine to threaten his livelihood and his life, he finds himself in need of a quick escape.
As the ascent of the talkies looms on the horizon, the brothers producer offers them an opportunity that couldn t be better timed: travel to Africa to compile stock footage of the exotic locales, as well as filming a new comedy in the jungle. Together with an unlikely crew of producers, stars and hangers-on, the Grands set out for Malwiki, where among the tribesmen they each discover unforeseen truths about themselves, their lovers, and the meaning of the movies.
Moving from the piers of Coney Island to Africa's veld, and further to the glitter of early Hollywood, "O, Africa " is an epic tale of self-discovery, the constraints of history and prejudice, and the stubborn resolve of family and friendship in the face of tragedy.

Andrew Lewis Conn has written essays, short fiction, and reviews for "The Believer," "Film Comment, The Village Voice, Time Out New York, "and the "Indiana Review" among others and attended writers residencies at Yaddo and Ledig House in Hudson, NY. Conn s previous novel, "P, "was chosen as a best book of the summer of 2003 by "Salon, Time Out New York, The Oregonian, "and "Nerve; "one of the best books of the year by the "Village Voice "and the "Austin Chronicle"; and long-listed as one of the best books of the millennium (so far!) by "The Millions.""

“Andrew Lewis Conn has written a strange, cool, hilarious and oddly moving masterpiece. DeLillo and Bellow have both sunk roots into Conn's prose, but the results are uniquely his own. O Africa! is a thing of wonder.” – Gary Shteyngart, author of Super Sad True Love Story

“A wise, irresistible comedy of artists, gangsters, hustlers, brothers, lovers and kings set at the end of the era of American silent film. Andrew Lewis Conn writes with a daring, vital, great-hearted brilliance. O Africa! moves with the swiftness of light and illuminates our present moment most ingeniously.” – Mary-Beth Hughes, author of Double Happiness

“Andrew Lewis Conn's O, Africa! is one of the funniest and saddest books I've read in years. It's a tender satire of the heroic age of American film, and the same time a heartbreaking portrait of two brothers lost in the images of their time, and their hearts' desires. Conn knows what he's talking about, and he writes with a Bellow-esque vigor that cranks the story into flickering, shimmering life.” – Paul La Farge, author of Luminous Airplanes

"It's been—actually, don't remind me how many years—since Conn's singularly audacious debut, and though O, Africa! charts an exciting new course, the author remains as he was: besotted by the movies and drunk on words." – Ed Park, author of Personal Days

"Conn sends us on an engaging, entertaining, funny, and moving trip... A writer to watch. --Kirkus Reviews