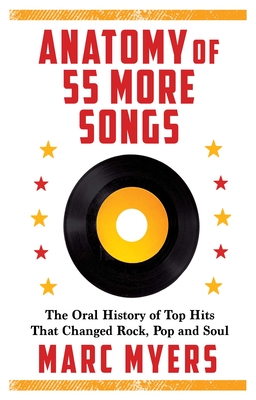 Following his 2016 smash hit Anatomy of a Song, acclaimed music
journalist Marc Myers collects fifty-five new oral histories of
iconic songs from his popular Wall Street Journal column Songs that sell the most copies become hits, but some of those hits become
something more--iconic recordings that not only inspire a generation but also
change the direction of music. In Anatomy of 55 More Songs, based on his
column for the Wall Street Journal, music journalist and historian Marc Myers
tells the story behind fifty-five rock, pop, R&B, country, and soul-gospel hits
through intimate interviews with the artists who wrote and recorded them. Part oral history, part musical analysis, Anatomy of 55 More Songs ranges
from Creedence Clearwater Revival's "Bad Moon Rising" to Dionne Warwick's
"Walk On By," The Beach Boys' "Good Vibrations," and Black Sabbath's
"Paranoid." Bernie Taupin recalls how he wrote the lyrics to Elton John's
"Rocket Man;" Joan Jett remembers channeling her rage against how she had
been unfairly labeled and treated as a female rocker into "Bad Reputation;" and
Ozzy Osbourne, Elvis Costello, Bob Weir, Sheryl Crow, Alice Cooper, Roberta
Flack, John Mellencamp, Keith Richards, Carly Simon, and many others reveal
the emotions and technique behind their major works. Through an absorbing chronological, song-by-song analysis of the most
memorable post-war hits, Anatomy of 55 More Songs provides a sweeping look
at the evolution of pop music between 1964 and today. This book will change
how you listen to music and evaluate the artists who create it.

MarcMyers is a regular contributor to the WallStreet Journal, where he writes about music and the arts. He is the authorof the critically acclaimed books Anatomy of a Song, Why JazzHappened, and Rock Concert, and posts daily at JazzWax.com, athree-time winner of the Jazz Journalists Association's award for Jazz Blog ofthe Year.