On the Down Low: A Journey Into the Lives of "Straight" Black Men Who Sleep With Men (Paperback) 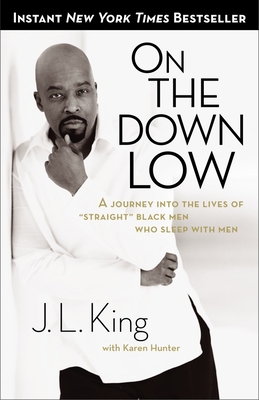 A bold exposé of the controversial secret that has potentially dire consequences in many African American communities.

Delivering the first frank and thorough investigation of life “on the down low” (the DL), J. L. King exposes a closeted culture of sex between black men who lead “straight” lives. King explores his own past as a DL man, and the path that led him to let go of the lies and bring forth a message that can promote emotional healing and open discussions about relationships, sex, sexuality, and health in the black community.

Providing a long-overdue wake-up call, J. L. King bravely puts the spotlight on a topic that has until now remained dangerously taboo. Drawn from hundreds of interviews, statistics, and the author’s firsthand knowledge of DL behavior, On the Down Low reveals the warning signs African American women need to know. King also discusses the potential health consequences of having unprotected sex, as African American women represent an alarming 64 percent of new HIV infections. Volatile yet vital, On the Down Low is sure to be one of the most talked-about books of the year.

“A survey by the Centers for Disease Control in Atlanta found that nearly a quarter of black HIV-positive men who had sex with men consider themselves heterosexual.”
—Essence

J. L. KING is an HIV/STD prevention activist, educator, and author. His expertise has been cited in national publications such as the New York Times and Essence, and his television appearances have ranged from The News Hour with Jim Lehrer to Black Entertainment Television. The father of three, he lives in Chicago.

“A wake-up call.” —Dallas Voice
“A good read.” —The News-Sentinel (Fort Wayne, Indiana)
“A revealing look at an important social health issue.” —Booklist
“King ultimately delivers a powerful and emotional story and must be lauded for having the courage to do so!” —QBR The Black Book Review

This book has folks buzzing like a tree full of cicadas.” —Philadelphia Inquirer

“There's a new book girlfriends have got to read. It's a page-turner.” —Newsday (New York)