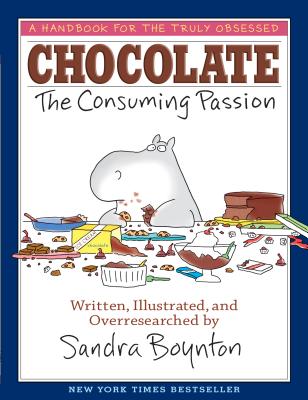 Wait. Sandra Boynton wrote a book about CHOCOLATE? For grown-ups?

Oh YES! Boynton’s beloved classic returns, updated and redrawn by her for a whole new generation of chocophiles. In addition to her extensive new research, Boynton also nobly sourced and consumed untold quantities of great chocolate, with no thought for her own personal safety.

Lavishly illustrated and filled with useful facts and cheerful misinformation, CHOCOLATE: The Consuming Passion is the absolute ideal gift for every true chocolate obsessive. Discover the many faces of chocolate—milk chocolate, dark chocolate, boxed chocolates, pretend chocolate, and the wild new frontier of small-batch craft chocolate. Learn about chocolate’s complex effects on the body, the psyche, and the soul. Prepare select simple recipes, such as “Hippo Pot de Mousse.” Learn how to grow your own chocolate, assuming you don’t mind relocating to within 15º of the Equator. There’s even a handy guide to saying “Excuse me, where is the nearest chocolate?” in eleven languages, including Klingon. (Nook-dock YOOCH dah-PULL?) Boldly go.

Sandra Boynton is a popular American cartoonist, children's author, songwriter, producer, and director. Since 1974, Boynton has written and illustrated over sixty children's books and seven general audience books, including five New York Times bestsellers. More than 70 million of her books have been sold, "mostly to friends and family," she says. She has also written (with Michael Ford) and produced six albums of renegade children's music. Three of her albums have been certified Gold (over 500,000 copies sold), and Philadelphia Chickens, nominated for a Grammy, has gone Platinum (over 1 million copies sold). Boynton has also directed twelve music videos of her songs, including the award-winning "One Shoe Blues" starring B.B. King, "Alligator Stroll" starring Josh Turner, and "Tyrannosaurus Funk" (animation) sung by Samuel L. Jackson. She lives in rural New England, and her studio is in a barn with perhaps the only hippopotamus weathervane in America.

"Chocophiles -- and others -- will find practical information amid the humor." —The Sacramento Bee

“The most successful of her several books for grownups … defies genre, but on first blush one might be tempted to call it an illustrated natural, culinary, and industrial history of chocolate. What is striking about 'Chocolate,' though, is the way its seemingly unvarnished earnestness is coated in a generous robe of sardonic tastemaking.”
—Ian Bogost, The New Yorker