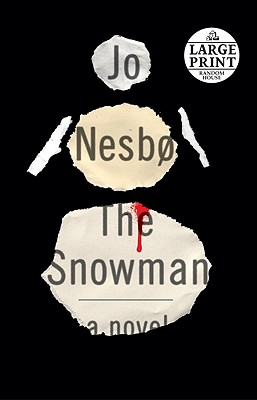 By Jo Nesbo, Don Bartlett (Translator)
$26.00
If not in stock, we can Special Order from the publisher

Internationally acclaimed crime writer Jo Nesbø’s antihero police investigator, Harry Hole, is back: in a bone-chilling thriller that will take Hole to the brink of insanity.

Oslo in November. The first snow of the season has fallen. A boy named Jonas wakes in the night to find his mother gone. Out his window, in the cold moonlight, he sees the snowman that inexplicably appeared in the yard earlier in the day. Around its neck is his mother’s pink scarf.

Hole suspects a link between a menacing letter he’s received and the disappearance of Jonas’s mother—and of perhaps a dozen other women, all of whom went missing on the day of a first snowfall. As his investigation deepens, something else emerges: he is becoming a pawn in an increasingly terrifying game whose rules are devised—and constantly revised—by the killer.

Fiercely suspenseful, its characters brilliantly realized, its atmosphere permeated with evil, The Snowman is the electrifying work of one of the best crime writers of our time.

Jo Nesbo is a musician, songwriter, economist, and author. His previous Harry Hole novels include "The Redbreast, Nemesis, "and "The Devil s Star. "His books, translated into forty languages, have sold more than six million copies worldwide, and he has received the Glass Key Award for best Nordic crime novel (previously awarded to Stieg Larsson and Henning Mankell). He lives in Oslo."

“With Henning Mankell having written his last Wallander novel and Stieg Larsson no longer with us, I have had to make the decision on whom to confer the title of best current Nordic writer of crime fiction. After finishing Jo Nesbø’s The Snowman, I hesitate no longer . . . This is crime writing of the highest order, in which the characters are as strong as the story, where an atmosphere of evil permeates, and the tension begins in the first chapter and never lets up.” —Times (UK)

“The Snowman is a superb thriller—smart, stylish, beautifully paced and meticulously plotted . . . Nesbø is such an insightful portraitist that Hole and all the secondary characters are convincing at just about every bloody turn . . . The psychological aspects of the novel are on a par with Ruth Rendell’s inspector Wexford mysteries. Ultimately, though, what sets Nesbø apart is his ability to keep the pages turning with such intellectual dexterity.” —Newsday

“Every now and then, a truly exceptional crime novel comes along, something so gripping that it recalls classics such as The Silence of the Lambs. Jo Nesbø has pulled it off with The Snowman . . . [which] establishes him as a writer of rare ingenuity and total confidence.” —Sunday Times (UK)

“Irresistibly addictive . . . This is reading as you experienced it in childhood, without any gap between eye and mind, but with the added pleasures that adult plots and adult characters can bring . . . It is Nesbø’s plots—brilliantly conceived, carefully worked out, and complicatedly satisfying—that finally make [his books] unputdownable.” —Slate

“Nesbø is being hailed as the next Stieg Larsson or Henning Mankell . . . Apt comparisons, but they don’t go far enough. This is simply the best detective novel this reviewer has read in years . . . Nesbø’s latest thriller reads like a symphony, from the thundering first chords that pull the reader into a magical world through the delicately enticing development in which motifs and story strands are woven together leading to a pounding, furious conclusion.” —Library Journal (starred)