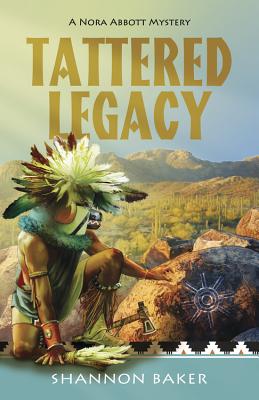 This is book number 3 in the Nora Abbott Mystery series.

Nora Abbott risks her career at Loving Earth Trust on a film project to convince Congress to expand the Canyonlands National Park. But someone is desperate to keep the secrets of the land hidden. When her best friend and director of the film is found dead, Nora is convinced it wasn't an accident. Nora's Hopi kachina messenger has vanished and now it looks as though Cole Huntsman, the man she's finally allowed herself to love, has left her, too.

As Nora uncovers an unlikely intersection of ancient Hopi legends, a secret polygamist sect, and one of the world's richest men, she is drawn deeper into danger. Her mother's surprising past holds the key to the clash of cultures, but will Nora put all the pieces together in time to prevent disaster? Set in the iconic red rocks of Moab, Utah, Nora races to discover what really lies beyond the stars.

Shannon Baker (McCook, NE) can often be found backpacking, skiing, kayaking, cycling, or just playing lizard in the desert. From the Colorado Rockies to the Nebraska Sandhills, the peaks of Flagstaff and the deserts of Tucson, landscapes play an important role in her books. She is a member of SinC, MWA, and Rocky Mountain Fiction Writers.  Baker was named the Rocky Mountain Fiction Writers 2014 Writer of the Year.  Visit her online at Shannon-Baker.com.