Hans Christian Andersen: The Journey of His Life (Hardcover) 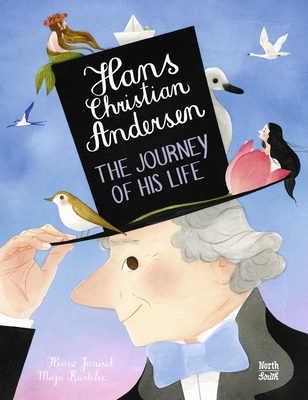 “If you like, I’ll tell you the story of a boy who learned to fly.”

Through an enchanted conversation with a young girl in a horse-drawn coach, Hans Christian Andersen shares his life’s struggles, dreams, and triumphs—whose threads can be found woven into his greatest stories. He tells her about the “fairy tale of his life” and how the son of a shoemaker became a celebrated writer.

Heinz Janisch paints a sensitive portrait of Andersen and his literary work. Maja Kastelic has developed a well-suited illustration concept for this story that combines sumptuous art of a picture book with elements of a graphic novel. Thus, for the first time, H. C. Andersen’s life and work become a fascinating collage in picture book form.

A moving, inventive story about the life of Hans Christian Andersen.

Heinz Janisch was born in Güssing, Austria. He studied German and journalism in Vienna. He has worked for Austrian radio since 1982 and is editor of the series Menschenbilder [Human Images]. He has published countless books for children of all ages and has been awarded many prizes, including the Austrian Prize for Books for Children and Young Adults, and the Bologna Ragazzi Award. He has also been nominated for the German Prize for Children’s Literature. Heinz now lives in Vienna and in Burgenland, Austria.

Maja Kastelic was born in Slovenia, where she studied painting, philosophy, and visual art theory. For several years she worked as a fresco restorer before devoting herself to illustrating children’s books. Prizes include the White Ravens Award, and her work has been displayed at the Illustrators’ Exhibition in Bologna. Her last book for NorthSouth was Hans Christian Andersen -The Journey of His Life.

There’s something truly magical happening in Hans Christian Andersen: The Journey of His Life. It’s not just the context, although there’s plenty of magic to be found there. It’s in everything, really: the story, the illustrations, the colors, the compositions. If there’s a perfect picture book, in my opinion, I’d say this gets damn close to being it.
— John Herzog

Aside from the stories themselves, this lyrical outing offers younger audiences the best insight into Andersen’s life and gifts since Jane Yolen’s The Perfect Wizard (2005).
— John Peters

In her art, Kastelic melds the text layers, shifting among soft watercolors of the coach ride, sepia-toned memories of Andersen’s childhood, and vividly hued compositions recalling vintage fairy tale illustration for references to Andersen’s stories.
— Bulletin of the Center For Children's books

For those who want a short tour through Andersen’s life, they can have it with this illustrated picture book detailing the struggles, dreams and triumphs of the inimitable storyteller. Inspiring for children and adults alike.
— Book Riot

The sumptuous illustrations use graphic novel elements to tell the story. In the illustrations, there are references to well-known authors of children’s books and some famous children’s book characters, like The Little Prince, Pinocchio, and more. An author’s note tells more about Hans Christian Andersen’s life.
— Omnilibros