I Am Regina (Paperback) 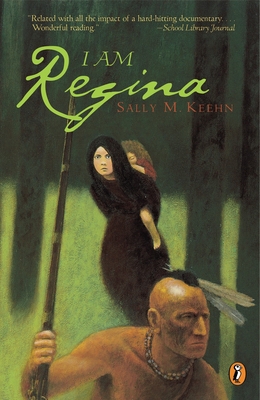 The cabin door crashes open-and in a few minutes Regina's life changes forever. Allegheny Indians murder her father and brother, burn their Pennsylvania home to the ground, and take Regina captive. Only her mother, who is away from home, is safe. Torn from her family, Regina longs for the past, but she must begin a new life. She becomes Tskinnak, who learns to catch fish, dance the Indian dance, and speak the Indian tongue. As the years go by, her new people become her family . . . but she never stops wondering about her mother. Will they ever meet again?

"A first-person narrative based on the true story of a young woman held by Indians from 1755-1763, related with all the impact of a hard-hitting documentary . . .Wonderful reading." (School Library Journal)

"I Am Regina is an enthralling and profoundly stirring story, historical fiction for young people at its very finest." (Elizabeth George Speare, Newbery Award-winning author of The Witch of Blackbird Pond)

Sally Keehn can remember her childhood days in Annapolis, Maryland – days spent reading, horseback riding, swimming, and exploring the woods surrounding her grandfather’s farm. Though she would bid Annapolis good-bye at the age of nineteen to embark on an English degree at Hood College, Keehn’s days of “exploring” were just beginning.

After college, her thirst for learning led her to Korea, where she spent a year working for the American Red Cross and traveling through Far-East Asia. She then proceeded to Drexel University for her M.S. in Library Science, and she has worked as a librarian in both Maryland and Pennsylvania.

It was while writing a travel book with her husband that Sally Keehn discovered the incident that gave rise to her first historical novel for Philomel – the award-winning I Am Regina. Since then, she’s searched out America’s back-roads for the stories of its people and its past. She’s written six novels for Penguin Books for Young Readers: three works of historical fiction - I Am Regina, Moon of Two Dark Horses and Anna Sunday; a contemporary novel based loosely on her own life - The First Horse I See; a fantasy set in Eastern Tennessee during the troubled era following the Civil War – Gnat Stokes and the Foggy Bottom Swamp Queen. And in spring, 2007, Philomel Books will release her sixth title - a fantasy set in 1872 south-eastern Kentucky – Magpie Gabbard and the Quest for the Buried Moon.

Sally Keehn says, “I never know until I go exploring what new story – what new adventure – lies beyond the bend in the road.”

*You can learn more about Sally Keehn and her books at: www.sallykeehn.com