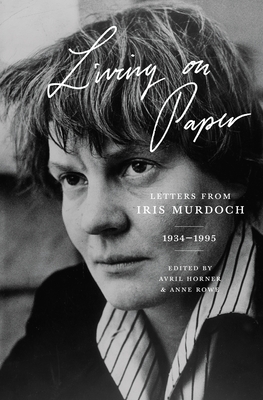 For the first time, novelist Iris Murdoch's life in her own words, from girlhood to her last years

Iris Murdoch was an acclaimed novelist and groundbreaking philosopher whose life reflected her unconventional beliefs and values. But what has been missing from biographical accounts has been Murdoch's own voice--her life in her own words. Living on Paper--the first major collection of Murdoch's most compelling and interesting personal letters--gives, for the first time, a rounded self-portrait of one of the twentieth century's greatest writers and thinkers. With more than 760 letters, fewer than forty of which have been published before, the book provides a unique chronicle of Murdoch's life from her days as a schoolgirl to her last years. The result is the most important book about Murdoch in more than a decade.

The letters show a great mind at work--struggling with philosophical problems, trying to bring a difficult novel together, exploring spirituality, and responding pointedly to world events. They also reveal her personal life, the subject of much speculation, in all its complexity, especially in letters to lovers or close friends, such as the writers Brigid Brophy, Elias Canetti, and Raymond Queneau, philosophers Michael Oakeshott and Philippa Foot, and mathematician Georg Kreisel. We witness Murdoch's emotional hunger, her tendency to live on the edge of what was socially acceptable, and her irreverence and sharp sense of humor. We also learn how her private life fed into the plots and characters of her novels, despite her claims that they were not drawn from reality.

Direct and intimate, these letters bring us closer than ever before to Iris Murdoch as a person, making for an extraordinary reading experience.

Iris Murdoch (1919-99) was a British writer and philosopher. Her twenty-six novels include the Booker Prize-winning The Sea, the Sea. Avril Horner and Anne Rowe are the coeditors of Iris Murdoch: Texts and Contexts and Iris Murdoch and Morality.