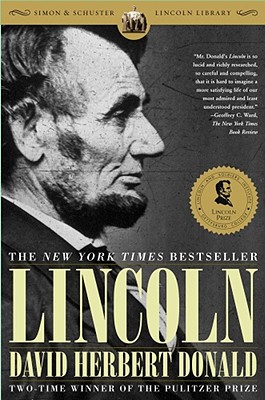 Donald brilliantly depicts Lincoln’s gradual ascent from humble beginnings in rural Kentucky to the ever-expanding political circles in Illinois, and finally to the presidency of a country divided by civil war. Donald goes beyond biography, illuminating the gradual development of Lincoln’s character, chronicling his tremendous capacity for evolution and growth, thus illustrating what made it possible for a man so inexperienced and so unprepared for the presidency to become a great moral leader. In the most troubled of times, here was a man who led the country out of slavery and preserved a shattered Union—in short, one of the greatest presidents this country has ever seen.

David Herbert Donald is the author of We Are Lincoln Men, Lincoln, which won the prestigious Lincoln Prize and was on the New York Times bestseller list for fourteen weeks, and Lincoln at Home. He has twice won the Pulitzer Prize, for Charles Sumner and the Coming of the Civil War, and for Look Homeward: A Life of Thomas Wolfe. He is the Charles Warren Professor of American History and of American Civilization Emeritus at Harvard University and resides in Lincoln, Massachusetts.

Harold Holzer Chicago Tribune "Lincoln immediately takes its place among the best of the genre, and it is unlikely that it will be surpassed in elegance, incisiveness and originality in this century. . . . A book of investigative tenacity, interpretive boldness and almost acrobatic balance."

David W. Blight Los Angeles Times "A one-volume study of Lincoln's life that will augment and replace the previous modern standards by Benjamin Thomas (1953) and Stephen Oates (1977). Donald's Lincoln is a scholarly achievement."